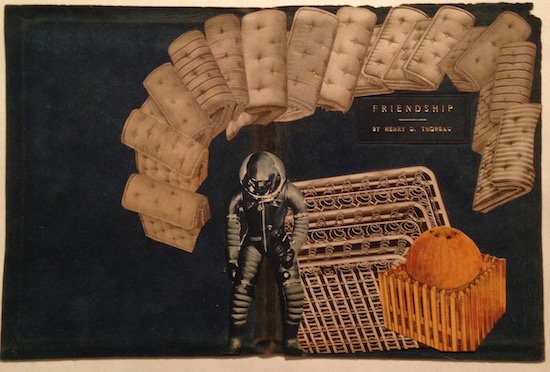 I used to have an irregular visitor, someone I’d known many years earlier, who had discovered where I lived and would drop by unannounced, always bringing a token, usually some ancient bit of printed matter. One day he brought the edition of Thoreau’s On Friendship published in 1903 by the Roycroft Press, the publication arm of the empire of kitsch founded by Elbert Hubbard, the would-be American William Morris. The minute I laid eyes on it I saw its deep blue sueded leather cover as the night sky. What would go on a night sky? Stars? A Montgomery Ward catalog answered: mattresses. What would look up at the sky? Box springs. It sat unfinished for weeks, until I must have remembered the title of Peter Wollen’s 1989 film Friendship’s Death (which I have yet to see), featuring Tilda Swinton as an android astronaut. Then it was an easy matter finding an astronaut succumbing to G forces, and the dome of the planetarium in Leipzig, for which I had to destroy another collage.