Stable but poisonous
except to particular fish who know how to live
in it, how to draw nourishment from it,
what look like its purposeful movements are
truly wild,
stochastic, even frantic, however slow.
The anemone cannot let go.
Her way of life, her subsistence, her hunger,
demands—

My neck does hurt. Thanks for asking. I’ve been
seated in this one place for so long.
I chew on my hair. I stare. I sit on my hands.
I am like someone who has to remain in place,
on hold, in line,
on a bench in a bureaucrat’s office, while
continuing to hear
the highest notes in a triumphant song.

This anemone will feed herself first.
The tips of her limbs are the color of highlighter
markers,
yellow and pink and mint-chocolate-chip-ice-
cream green.

She has no eyes, or else
she is all eyes. She can detect bits of sun, and
salinity,
and currents, and sound, and pH,
a kind of chemical sixth sense.

She wants to be seen
as a host, which isn’t wrong.

The pressure where she lives must be intense.

How did you grow, far mentor, seen
in a dream, unable
to settle down more
than once? How did you eat,
with your appetite so much like mine,
sated in drifting youth, and never since?

Dress underwater, pinned back with your
bellflower sleeves,
I wanted to be like you for so long.

You can never leave.

You know
when only toxicity keeps us alive;
the tragic condition of the deepest waters
has persuaded you to adapt.

Your rock, like most rocks,
is nothing but hardened sand.

There are pillows in the room, and a pillowcase,
wet at the slip
from when I chewed it, asleep.

What am I doing on land? 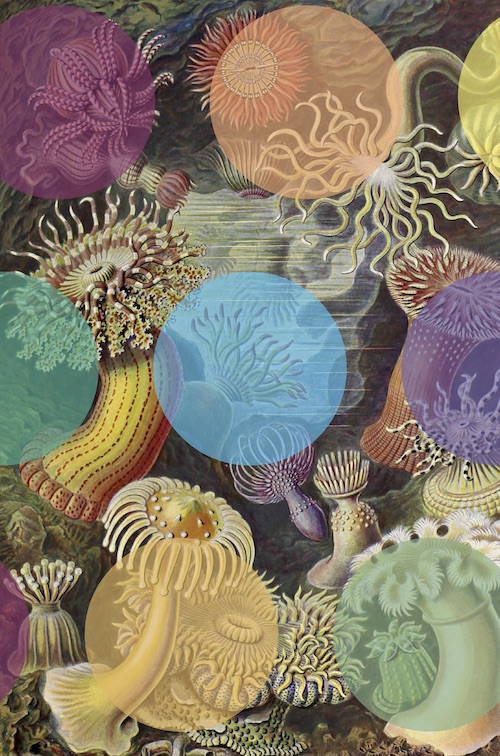