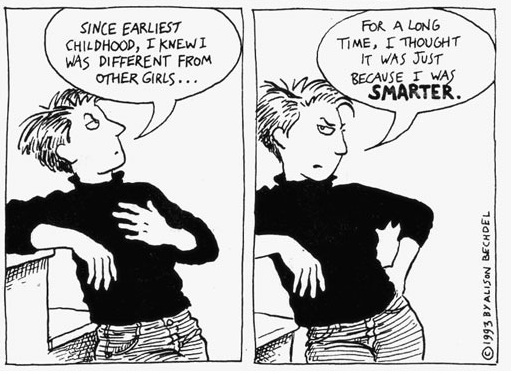 About every other week, I introduce someone to the Bechdel Test for movies. In order to pass the test, a movie has to have at least two named female characters, who have a scene together, in which they talk about something other than men. Every time I tell people about the test, I can all but hear their brains start to whir as they recollect the movies they’ve seen recently — and then their eyes go wide as they realize how few Hollywood productions pass. The power and unexpectedness of the test is characteristic of the insight of cartoonist and memoirist ALISON BECHDEL (born 1960), best-known for her long-running cartoon strip Dykes to Watch Out For (in which the Bechdel Test first appeared), and her 2006 award-winning graphic novel Fun Home, which details her relationship with her deceased father. Unlike many cartoonists, Bechdel deals with neither the fantastical nor the exotic: she writes and draws about subjects that are both specific and mundane (her perfectionist, closeted father in the funeral home, for example) but she delves into them so incisively that, like the Bechdel Test, they become both widely applicable and surprising.

On his or her birthday, HiLobrow irregularly pays tribute to one of our high-, low-, no-, or hilobrow heroes. Also born this date: Georges Bataille.