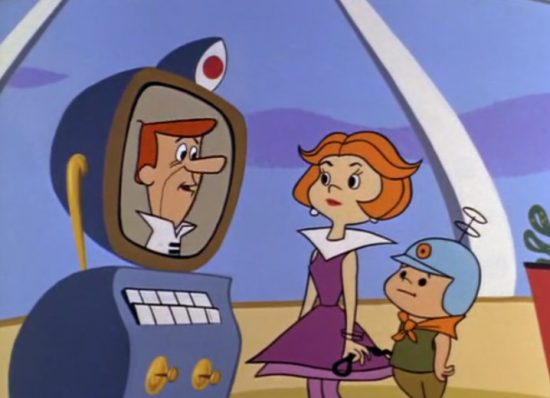 The Jetsons was about the future but even by the time I was watching it, it was from the past.

Push-button meals exist but the mom pushes the buttons. Space treadmills are available for exercise but the dad still walks the dog. The boy is smart and good at school and inventing. The young woman is boy-crazy and into the latest trends. Mom is a bad driver. Dad is lazy. Everyone on the planet is white. The robot maid sounded just like my grandma.

What kept me watching The Jetsons was how technology was just a thing you had, a normal thing that solved problems, for everyone. Push buttons existed to make everything easier, not to make the life of the already-privileged another 5% better. While it was unclear just what the Jetsons did with all their free time — George famously only worked a few hours a week and Jane didn’t work outside the home — it was clear that what they weren’t doing was cleaning their house, chopping onions, or doing the laundry. Even as a kid with my own stay-at-home mom, I knew this was something like progress. And yet… who was making the machines? Why have a humanoid maid in a costume with a female voice? If everyone’s doing OK why is there still crime?

The Jetsons that captivated me with its bright colors, familiar gender roles, and commonplace, inoffensive technology is nearly unwatchable to grown-up me. While people make a lot out of the fact that we now have Jetsons-anticipated things like smart watches, drones and stretch pants you can wear to work, it’s surprising how much of 2060 seems backwards.

Smoking is still a thing. Cash money is still a thing. Shopping is still something you go out to a store to do. Driving a car is still something you do by hand. As I look at the glorious future technology is promising me today, and think about my part in creating or promoting it, I think about how right and how wrong The Jetsons got it — and how it’s a much more difficult project for a much more complicated world than we have ever been able to imagine.