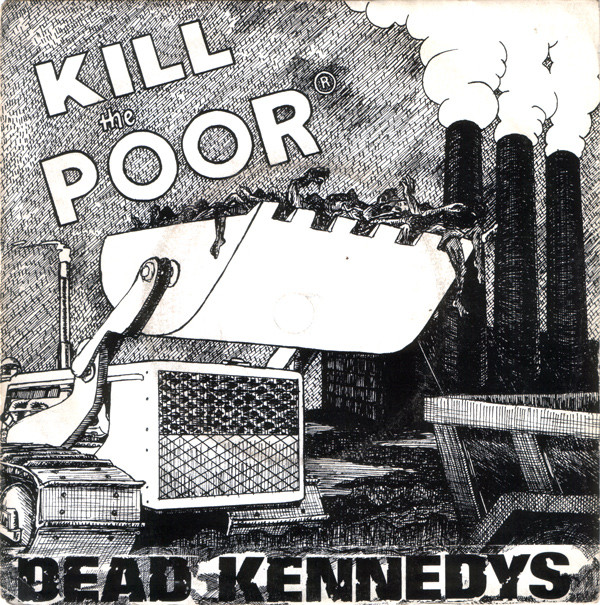 My relationship to punk music has always been complicated. I was an angry rural teen without a lot of larger context for the issues in society, or my family, that invoked that anger. I only heard the Dead Kennedys at friends’ houses; we had to go into the city to have even a chance of buying these albums for ourselves. “Kill the Poor” was an angry song about rich people hating poor people, and having weapons to do something about it.

The sun beams down on a brand new day, no more welfare tax to pay
Unsightly slums gone up in flashing light

I wore my Newbury Comics-purchased In God We Trust Inc. t-shirt to my suburban high school every chance I got.

I left home, moved to a city, ran into Jello Biafra at an Anarchist Book Fair. DK had broken up, coming to terms with the scene that they saw — a lot of white supremacist shitheads making the shows suck for everyone else. Biafra was on his own spoken-word tour, and I was struck at the time by his overwhelming masculinity, which seemed both apropos and out of place in the anarchist scene at the time. The only specific people mentioned in “Kill the Poor” were women.

In the late ’90s it was easier to get pop music from Napster than punk music, but I had better access to record stores. Hearing punk on CD felt wrong.

By the time DK reformed minus Biafra, I was living back in a rural area, dating a bass player in a jam band. His background was more metal than punk; we’d grown up in the same general area, listening to the same general music. Ten years later, he gets some news just after his 50th birthday: one of the Dead Kennedys is actually his biological dad. We dive back into the music, listening now for nostalgia and connection reasons.

A planned meet-up at a local show is cancelled due to COVID. The police are in the streets harming and murdering people of color, journalists. Biden is offered as the liberal solution and we’re supposed to ignore his handsiness, his more-of-the-sameness.

Jobless millions whisked away, at last we have more room to play
All systems go to kill the poor tonight

All the old songs take on new meanings when you find they’re sending royalties to your amiable septuagenarian relative. The most popular song of theirs this season? “Kill the Poor.”