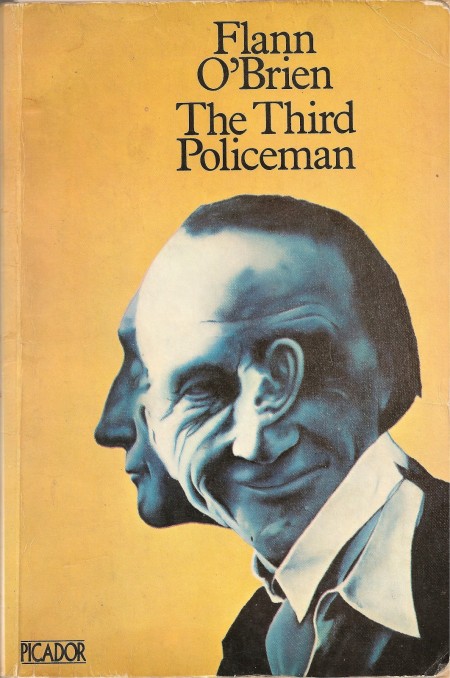 Flann O’Brien’s The Third Policeman — likely his masterpiece but not published in his lifetime — coils around on itself like the mainspring in an intricate timepiece, but one in which the usual laws of time and motion don’t apply. The book is bonkers. It gives us a narrator whose name is unknown but whose soul is called “Joe”; two policemen who speak in riddles and nonsense in a “completely false and unconvincing” police station; and a man who gradually swaps places with his bicycle, exchanging atoms as he rides. Oh, and it’s set in rural Ireland with all the requisite blarney.

The novel begins strangely but at least cohesively with our narrator caught up in a murder plot: he and a cohort put paid to a wealthier man so they might pilfer his fabled cash box. When the box is eventually located, however, “something happens” and, with the universe folding in on itself, the real story begins. Our narrator slips into parallel-sideways-afterlife world, the precise nature of which is never quite explained but is constructed from elements of the “murder plot” Ireland we’ve left behind.

The Third Policeman is a philosophical novel in the line of Sartre’s Nausea, but the elements of heroic fantasy are here too. There’s a hero in the narrator; villains everywhere, but especially in policemen (the useless two but also the scarier third, a powerful demon-type called Fox); and a sought-after object in the form of the cash box, itself containing the mythical element “omnium,” capable of giving the bearer anything he desires.

With its internal logic and copious footnotes to fictional scholarship, The Third Policeman is so high as literature that it goes all the way around and comes up through the bottom again. If you knew nothing of Flann O’Brien it’d be hard to know whether the book was written by a pioneer academic operating on the far side of knowledge or a lunatic ten-year-old who was never told about gravity. It also inspired parts of TV’s Lost (when it was suggested as a possible key to Lost’s plot, the publisher was taken by surprise and had to order a reprint) but don’t let that put you off.