My family has heard of Armstrong, Aldrin, Gagarin, Glenn and — because we’re Canadian — Hadfield, but I once won an astronaut-naming competition at a family event because I’m one of the few fans of MICHAEL COLLINS (born 1930), the “third” astronaut of 1969’s epic Apollo 11 moon landing. While Armstrong and Aldrin cemented their names in the history books by becoming the first humans to walk on the moon, Collins orbited in the command module. His watchful presence made one of the 20th century’s defining moments possible; it also temporarily made Collins what some wags have dubbed “the loneliest man in history” — the remotest, alone-est human being anywhere, of all time up to that moment. For 48 minutes per rotation, Collins was out of radio contact with the Earth and his colleagues on the moon — but he wasn’t lonely! Instead, he’s talked of his “awareness, anticipation, satisfaction, confidence, almost exultation.” Collins is the ultimate anti-celeb, a hero of the lonely, and a patron saint of designated drivers. What a hero. 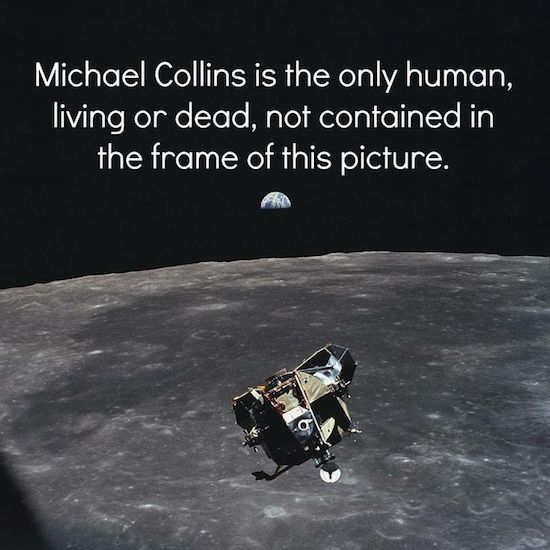 On his or her birthday, HiLobrow irregularly pays tribute to one of our high-, low-, no-, or hilobrow heroes. Also born this date: Neal Stephenson, Robert Pollard, Helmut Newton.