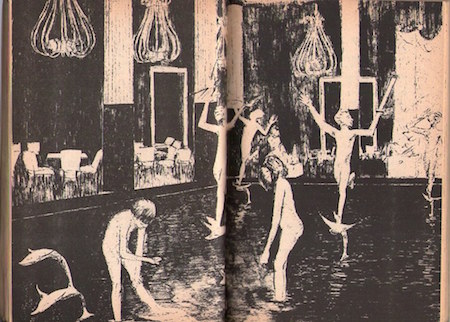 E.L. KONIGSBURG (1930–2013) wrote and illustrated children’s books, including a particularly great one: From the Mixed-Up Files of Mrs. Basil E. Frankweiler. The 1967 novel tells the story of Claudia Kincaid and her brother Jamie, who — yearning for freedom, history, art, and culture — run away from the stultifying life of school and suburbia in order to live in New York’s Metropolitan Museum of Art. You can’t fault Claudia’s escape plan: “[S]he saved her allowance and she chose her companion. [Jamie] could be counted on to be quiet, and now and then he was good for a laugh. Besides, he was rich.” It’s fun to revisit 1960s New York sights including the Donnell Library and, deliciously, the typewriter bolted to the sidewalk at the Olivetti Typewriter Showcase, but what’s so great about the novel is how it captures the strange sense of exhilaration that comes with being somewhere you’re not supposed to be. One of Konigsburg’s illustrations (which are beautiful, and radiate kindness), in particular, is a perfect depiction of freedom, adventure, resourcefulness, and mischief: Claudia and Jamie fishing for coins in the museum’s ornamental fountain in the dead of night. When The Mixed Up Files won the 1968 Newbery Medal, one of the author’s other books, Jennifer, Hecate, Macbeth, William McKinley, and Me, Elizabeth also received an honor — the only double honor in Newbery history. Konigsburg won the Newbery again for The View from Saturday in 1997. The world could use more of this type of unadulterated kindness and fun.

On his or her birthday, HiLobrow irregularly pays tribute to one of our high-, low-, no-, or hilobrow heroes. Also born this date: Bertolt Brecht, Frances Moore Lappé, Jimmy Durante.