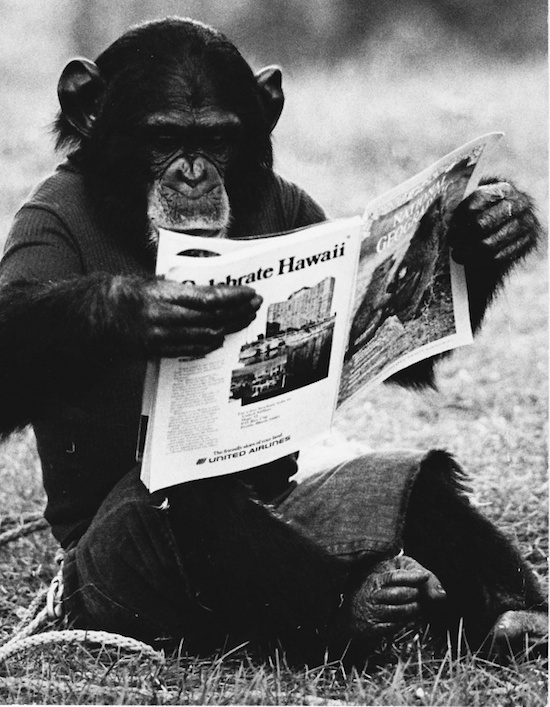 Chimpanzee NIM CHIMPSKY (1973–2000) was the subject of a Columbia University investigation into animal language acquisition. These studies have always struck me as odd in that the language taught is invariably human: American Sign Language in Nim’s case. The ways in which animals already communicate — vocalisations, electrocommunication, waggle dances — are not considered sophisticated enough to qualify as language, lacking grammar and syntax. It was perhaps this slavish devotion to the definition of language that led to Nim being raised in a human family, dressed and named (named, incidentally, after Noam Chomsky, who held that only humans were capable of language, as if this “evidence” would somehow knock him down a peg). Nim learned to construct signed sentences along the lines of “banana me eat” and “more eat Nim” and touchingly, “tickle me Nim play.” But it’s hard to see that this skill is any more sophisticated than laboratory apes’ ability to solve puzzles for a banana. Despite being raised human for a decade, the older Nim was passed around by conservation centers and laboratories, spent a lot of time sedated, depressed, and encouraged to smoke marijuana before dying of a heart attack at 26. Compare this to Jiggs IV, the fellow celebrity chimp who “played” Cheeta in Tarzan movies, who is still alive at 82, for full impact. Perhaps Nim’s legacy is for us to understand that animals aren’t humans and cannot be treated as such, but deserve our respect and protection anyway. Just as Copernicus taught us that the Earth is not the center of the universe, Nim shows that humanity may not be either. He reveals Anthropocentrism as another chauvinism and we honor Nim today as the first non-human HiLo Hero.

On his or her birthday, HiLobrow irregularly pays tribute to one of our high-, low-, no-, or hilobrow heroes. Also born this date: Zygmunt Bauman, Ben Katchor, Roy Campanella.