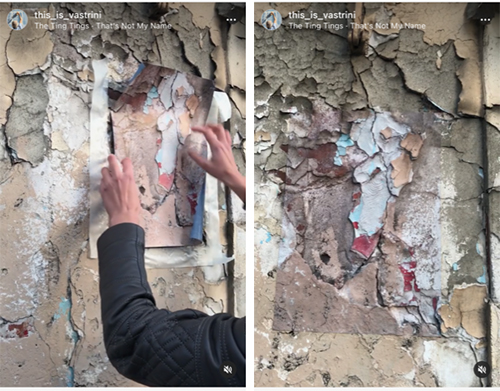 We might associate stealth with unofficial street art, such as graffiti, stenciling, making parks out of parking spaces, and other officially unsanctioned (if more or less tolerated, castigated and/or celebrated) creative expressions in the public space.

This stealth-in-process may be contrasted with the formally unstealthy (as for example this mural, which is positioned high above street level, presumably to avoid elaboration by unofficial/stealthy means). 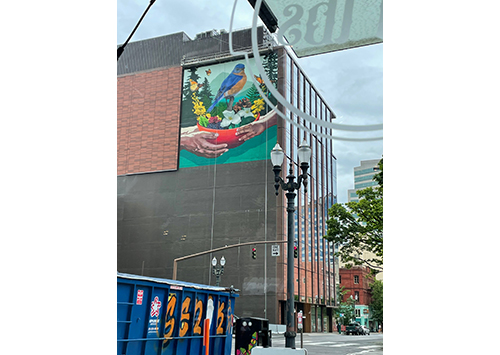 But there’s stealth… and then there’s this. 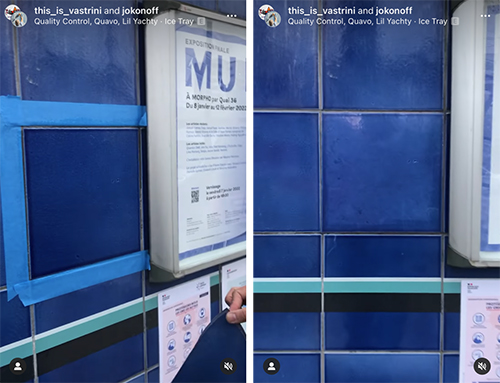 In Making reality (in)visible, Vastrini, a street artist whose medium is literally the street — or actually, the walls lining the street — selects a section of wall to be meticulously copied on paper until its texture cannot be visually distinguished from the original. The copy is then wheatpasted “back in place”, creating the ultimate copy of the thing on the thing.

But unlike other installations with which it shares a conceptual sympathy, such as Glen Seator’s Approach (which duplicated the street outside a San Francisco gallery, inside the gallery), and Walter De Maria’s Earth Room, Making reality (in)visible gets even closer. Approach was located next to what it represented; Vastrini’s series is wheatpasted right on top. This not only lessens the proximity gap, it performs some ontological magic: once up, the original becomes both visible by being duplicated in art, and invisible by being covered up, while the street art becomes invisible by blending in so well, while being literally visible, right there in the plein air. 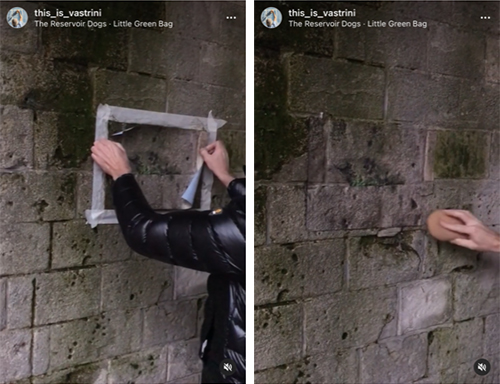 “Vastrini” the name echoes this in/visible dance, it’s the street(art) moniker of Valerio Vincenzo, whose wider artistic practice deals with philosophical questions of reality versus illusion, objectivity and subjectivity, and the trickster role of representation in art and media. 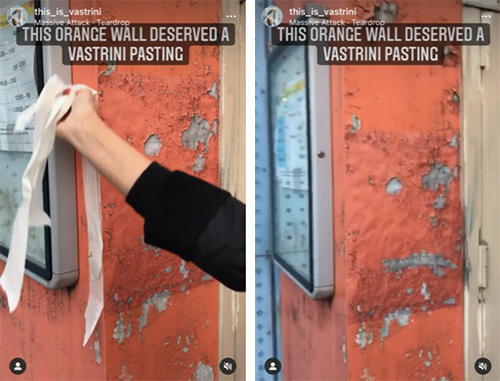 Appropriately, Vastrini chooses sections of wall that have already been customized by weather and time, creating an indecipherable palimpsest of surface and solidity, presentation and decay. By effacing yet enhancing that surface with a copy of itself, is Vastrini surfacing a message? And if so, could that message be more than a mere mirror-image?

Vastrini categorizes these pieces as “Idiocies”:

“In Greece, idiòtes were precisely those who led private lives outside the rules of good society. In the same way Vastrini’s “idiocies” behave today.”
– White Garage

These “idiocies” invite us to question whether walls are in fact as solid as they seem. Is it stone? Is it permanent? Is there no crossing over, or through? Or is what seemed to be an insurmountable barrier, just thin, painted, stealthy cardboard, waiting for someone to come along and have the curiosity, and the courage, to push? 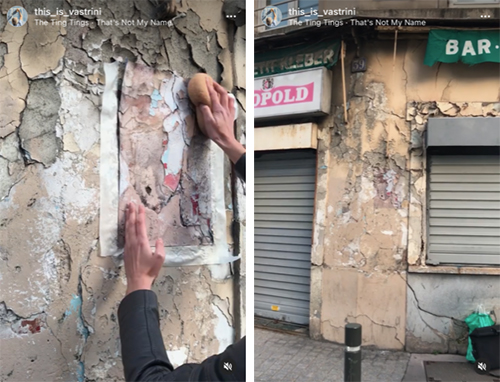 If you’re not planning to be in the Parisian suburbs anytime soon, don’t worry. This work necessarily includes its own documentation on social media. More and more, street artists are curating a robust online presence, and Vastrini documents these installations at @this_is_vastrini on Instagram. Do follow along — such excellence in stealth should not be overlooked.