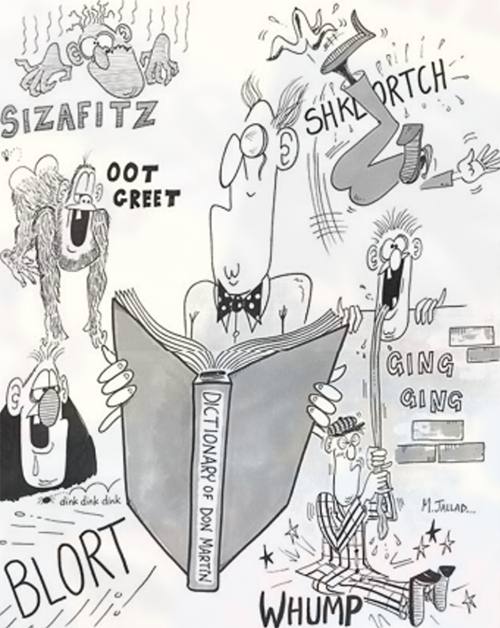 Eye Candy today celebrates the old-skool spirit of the early internet, where anyone could post anything about any weird obsession, and often did. Back then there lived sites and “home pages” that represented windows into the mindset of their hosts, and were not even a gleam in a marketer’s eye. Though fewer, and more far-between (and harder to search for) now, some of these sites still exist. And so, in the spirit of DIY, Eye Candy is pleased to have landed upon Doug Gilford’s Mad Cover Site, in which Gilford collects, dissects, re-sorts, and respects what aims to be a comprehensive companion to MAD Magazine’s marathon 20th-century run. 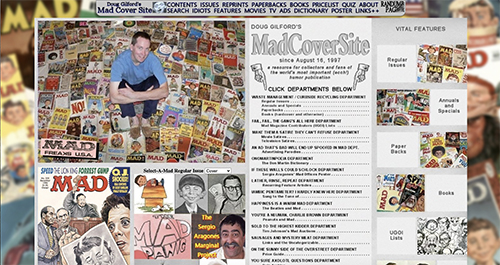 Eye Candy would like to draw your attention to The Don Martin Dictionary, a collection of sound effects that were written, drawn and enbubbled by cartoonist Don Martin in satires, panels, and cartoons throughout the years. 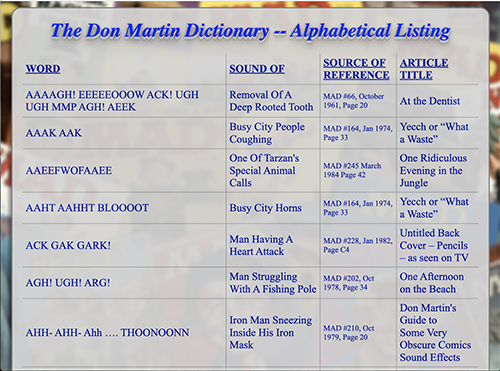 Not simply a list of effects, the Dictionary includes the context in which they were uttered, the featured cartoon or story in which they occurred, the issue and the date, all organized into a default HTML table. And although this does constitute a semantic use of the table tag, as it organizes data in tabular form, with headers and all, the look dates from the pre-CSS era when tables were the default for layout. Eye Candy is perhaps dating itself, but there is something democratic and encouraging about taking the tools and materials you have to hand, and doing something intriguing with the content. Would we like sortable columns? Dynamic images? Links back to archived issues? A companion Insta? Sure — but not at the expense of the low barrier to entry that the DIY approach encourages.

The Dictionary bubbles up moments of poetry: 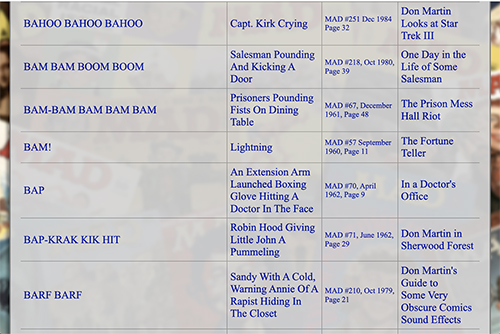 And sometimes the same “sound” would signify different meanings: 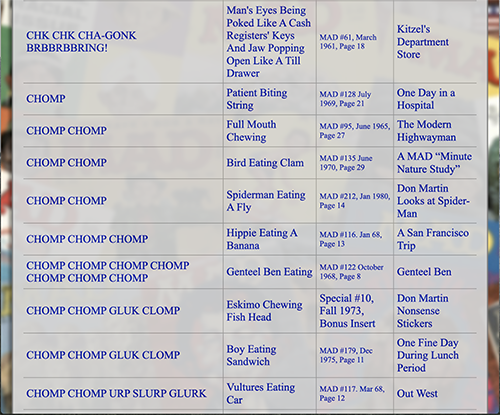 Throughout the site, and especially with the Dictionary, Gilford emphasizes the collaborative nature of the project. Although edited and expanded over the years, the original idea to collect the sound effects was by Richard Parks, and edited by Ed Norris, publisher of The MAD Panic, an early fanzine and resource. Aided by a team of researchers (which included Gilford), the first iteration was a print product, appearing in 2001 in John Hett’s The Journal of MADness #12; the copyright is held by Edward Norris and John Hett. Gilford migrated the material to the internet and has maintained and expanded it, and credits a full list of collaborators and roles. 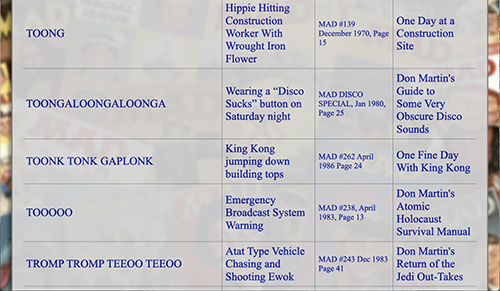 This endeavor has a strong resonance with one of HILOBROW‘s recent series: NERD Your Enthusiasm. How nerdy is it to not only be a completionist about a satire channel in media (The Simpsons, Adult Swim, David Foster Wallace, etc.), but to collect and organize and sort out some niche yet essential aspect of it, to become a nerd’s nerd, if you will? 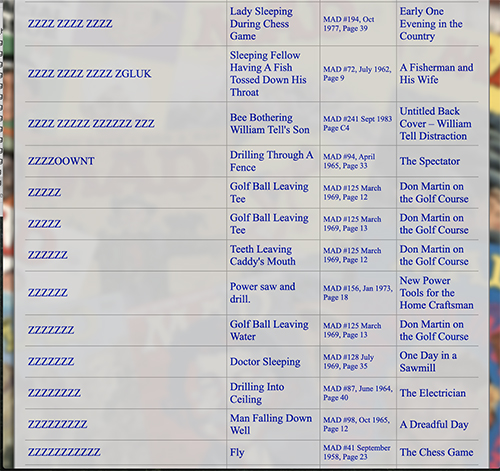