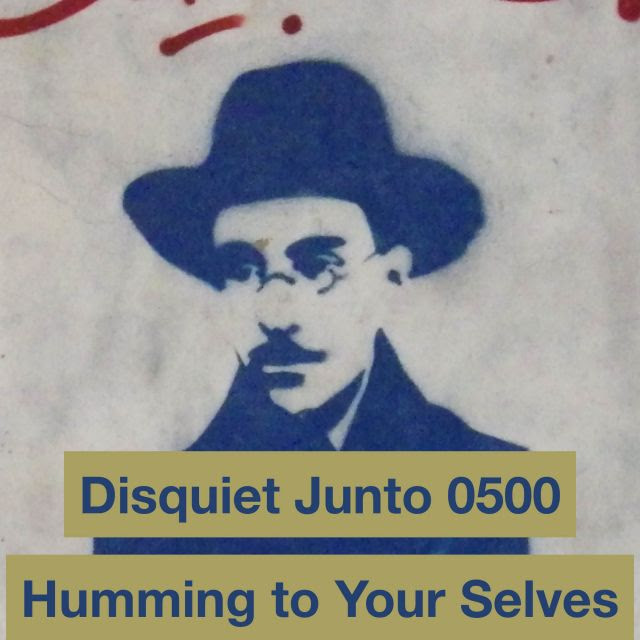 Eye Candy has been following, and occasionally participating in, the Disquiet Junto, a long-running series of open calls to compose and remix sounds and music. Participants are invited to work within different constraints each week. Membership is open, participation is free.

This past weekend marked a significant milestone, the 500th consecutive week of the Disquiet Junto. The Junto was created and curated by HILOBROW contributor Marc Weidenbaum in tribute to the futurist poet of Lisbon, Fernando Pessoa, whose The Book of Disquiet gave the Junto its name – at least the first half of it. The “Junto” part comes from Benjamin Franklin, whose “Junto Club” was formed as a series of regular, informal meetings to discuss “issues of morals, politics or natural philosophy.”

For this anniversary, the call was to “play a tune by yourself and as if by two people whom you invent.” Listen to some of the entries here:

It was Kamen Nedev of Madrid, Spain, who suggested via Twitter that after all this time we do a proper Disquiet Junto project inspired by the late poet Fernando Pessoa (1888-1935).

Step 1: Create two alternate identities, people other than yourself. Each of these two people should be musicians, and they should be strikingly different from you and from each other.

Step 2: For each of the two people you invented in Step 1, fill in their background. Think about where are they from, what are their interests, what sort of music do they make?

Eye Candy posed some questions to Marc on the occasion of nearly 10 years of collaborative sound-making:

EC: Do you think, overall, the Disquiet Junto is more Pessoa-inflected, or Franklin-inflected, in how it has played out? (I am imagining the Franklin influence to be the discussions/comments.) Or are you satisfied that it’s been a pretty even balance?

MW: “That’s a wonderful question. Thank you for it. I think the Disquiet Junto is fairly evenly divided between the influence of Fernando Pessoa and the influence of Benjamin Franklin. I should note that, by and large, it’s quite easy to participate in the weekly music composition prompts without being aware of where either word, Disquiet (from Pessoa’s The Book of Disquiet) or Junto (from Franklin’s 1727 private society of that name), originated.

“The “mutual self-improvement” aspect of Franklin’s original Junto provides a solid foundation for our group, and it’s a key part of why many people join in. Franklin was an instinctive creator of communities, small and large, from clubs to libraries to fire departments to schools to the United States of America. Our Junto is, in effect, his creation, as well. The Junto is very Pessoa in part because of certain aesthetic predilections inherent in the weekly music composition prompts: A lot of the musical prompts are about everyday sounds, everyday experiences, philosophical observations, then transformed into something artistic through reflection and consideration. In addition, an enormous percentage of Pessoa’s output was never completed. The Book of Disquiet itself is a collection of many scraps, of pieces of rough drafts. A big part of the Junto ethos is about posting unfinished work, works-in-progress, and I think that is very Pessoa.

“However, there is one aspect of Pessoa I would like to see become more generally accepted. I think the Pessoa mode would be one in which individuals read a prompt and don’t ask, “Does this appeal to me?” but instead put the “me” aside and allow that doing something apart from “me” can be not just a beneficial experience, but an essential one. To borrow a phrase from another poet, Walt Whitman, it’s evident that Pessoa contained multitudes. I think it’s healthy to embrace one’s inner multitudes, or at least one’s inner many, even one’s inner handful. I think a lot of participants do that already, certainly, but I don’t think I’ve done a good enough job of emphasizing the benefits for people of doing projects that don’t seem, on first glance, as applicable to them as individuals. Doing so requires me to strike a difficult balance as a moderator, because I don’t want the Junto to be a source of stress. I don’t want anyone to fear they’re missing out by skipping any project or set of projects. The overall design and structure of the Junto is that it’s there when participants have the time and interest, week in, week out. I would like the Junto to be a little more Pessoa as we proceed, in this sense of it, in people trying things precisely because, as a member might say, “it doesn’t feel like me.” ”

EC: Can you draw out any similarities to Pessoa’s project in the overall span of the Disquiet Junto? I haven’t read the entire The Book of Disquiet, but it seemed like he shied away from making any definitive statements. Although, the thing is long, so he did make a lot of statements…

MW: “There’s a good amount of futurism in Pessoa. He writes in The Book of Disquiet, “Cars at that time of day are rare, and their noise is musical.” There is, in his imagination, a sense of agency to sound: “the usual city noises seemed to hush, as if waiting.” He is a keen listener, in particular to how sound is itself a vibrant complex thing, composed of multiple sources in combination, such as in this description: “the faint din from the street and the slight sounds of work as usual in the quiet office.” All of those aspects of his listening, his musicality, are inherent in the Disquiet Junto. And that connection applies beyond sound to a more general artistic effort, to the way his poetry, especially the prose poetry of The Book of Disquiet, expresses the ordinary as a source of beauty and torment, narrative and stasis, alike.”

EC: What about that weird plurality in this week’s title, “Selves”?

MW: “A key thing to understand about Pessoa is his concept of the “heteronym.” Pessoa wrote from numerous points of view, and for each he developed a unique persona. These were, as Richard Zenith writes in his new biography of Pessoa, more than pseudonyms. These weren’t merely alternate names under which a person published work. They were alternate names under which Pessoa published work that was unique to each of those names, because they weren’t merely names. They were individual identities that inhabited his imagination. There is much that is remarkable about the work and life of Fernando Pessoa, not least of which is that his family name translates into English, from his native Portuguese, as the word “person.” ”

And post-Week 500? The Disquiet Junto will continue on. Perhaps you might consider participating yourself, if you haven’t yet, or jumping back in, if you have. The open invitation stands, and any disquietude is free.