What would you say about a person who has a clawfoot bathtub in her dining room? Don’t look at the photograph yet. I’m soaking, surrounded by candles and palm fronds, right? Loose chignon, bubbles, champagne flute aloft. Or maybe it’s a scene of punk decadence. I’m sprawled in the empty tub wearing only a man’s boxers and a violent slash of red lipstick. Either way, a clawfoot tub in a room other than a bathroom (or, in New York City, a kitchen) is voluptuous. It has appetites, and it doesn’t give a damn for your conventions.

My other tub, the one in my bathroom, is full sized. Oriented lengthwise, it takes up half the available space; you have to squeeze into my bathroom, like a Clydesdale backing into a horse trailer. Some time ago, I got an idea of switching things around so that the tub is along back wall. The room is a hair over four feet wide — just wide enough to accommodate the shortest commercially available tub. But the options are limited and the prices high. Also, it would mean moving the toilet out of the way. A big, ambitious project.

I was discussing this with an ex-boyfriend. We talk all the time about rearranging spaces and salvaging building supplies. Our relationship unfolded in a series of crazy, exhausting construction projects, which failed to make us rich, because we were dreamers who lacked some essential elements of common sense. All of which is to say: The next time we spoke, he had gone ahead and bought an antique 48” cast-iron tub off Craigslist for $150. I could pay him back whenever. The tub would be waiting for me, outside, in Upper Chichester, Pennsylvania, which is twenty-five miles south of Philadelphia, where I no longer live.

Suddenly I was back on the rollercoaster with my ex — headed south on the New Jersey Turnpike on a Megabus; renting a U-Haul in South Philly; driving out past the airport, into the Chester County suburbs, to the backyard where my tub was filling up with leaves and rainwater. Then white-knuckling it up the turnpike, over the George Washington Bridge, and down Amsterdam Ave — racing to meet the movers I’d hired to help me get the tub up four flights of stairs. The only ones who had not quoted me a fuck-you price over the phone.

That was half a year ago. There is no plan to install the tub. Gone are my days of cowboy renovation, and the first professional I consulted pointed out that moving the toilet would involve cutting through floor joists. I had an offer on the tub last month — one that would make me whole for the $150, the bus ticket, the U-Haul, gas, tolls, and movers — but it’s not for sale.

Because I am a person who has a clawfoot tub in her dining room. 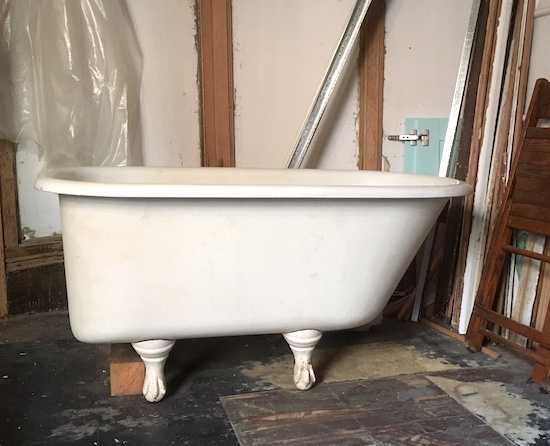