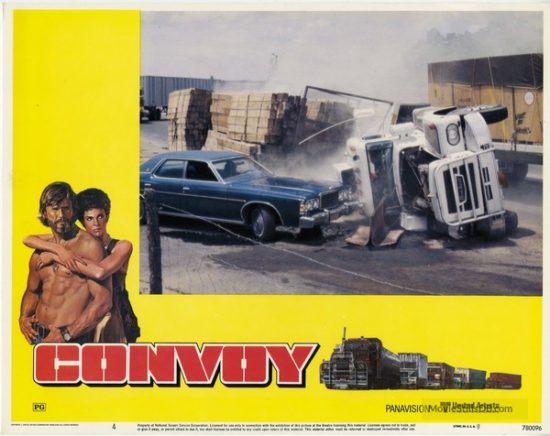 I first saw Convoy in the way it was meant to be seen: at the Mustang Drive-in, surrounded by Ontario cornfields. I remember the shuddering immensity of the trucks coming right at me and roaring past. I remember “What’s your forty” and “clean and green,” “negatory,” “copy,” and “bear in a plain brown wrapper.” CB culture had it all: the argot, the outlaws, the novelty songs. Convoy the movie was inspired by “Convoy” the song by C. W. McCall, which had been all over the radio a few years earlier. That was the summer of 1978, and I was twelve, and as far as I was concerned Convoy was celluloid zeitgeist.

I saw Convoy again recently, this time at Anthology Film Archive in the Lower East Side, and it turns out those vivid memories from the Mustang Drive-In had given me a false sense of familiarity. I’d remembered Steve McQueen as Rubber Duck instead of Kris Kristofferson. I’d forgotten Franklyn Ajaye, and the character-actor trifecta of Ernest Borgnine, Burt Young, and Seymour Cassel. Somehow the only cast member preserved accurately in memory was the forgettable Ali McGraw. There she was again, the Sally Fields to Kristofferson’s Burt Reynolds, reminding us that you can be too thin and too rich and certainly too tan.

I had Convoy preceding Smokey and the Bandit, which lingers in memory as an almost-Eighties movie — probably because of Reynolds’ ironic charm and cocksureness. Though Convoy actually came out a year later, it is solidly rooted in the Seventies. There’s that palpable sense of exhaustion. “The purpose of the convoy is to keep moving,” we’re told — as though even forward motion is a struggle. No one knows the reason for the convoy, really. As it grows in numbers, so too do the reasons for it. From speed traps to gas prices to the fifty-five mph speed limit; from police harassment to Watergate to Vietnam. And the convoy has no leader. “I’m just in front,” says Rubber Duck, reminding me of what a friend recently said about why he liked the Seventies: “It was the last time America had a sense of humility.”

Kristofferson is too self-conscious to be a real movie star, and he lacks Reynolds’s lascivious wit. But that’s okay, because Convoy is not a Hollywood star vehicle. That’s another thing I’d forgotten: it’s a Peckinpah movie, a countercultural western. These truckers, as the governor (Seymour Cassel) says, are “the embodiment of the cowboy tradition.” Trucks crash pointlessly into shacks, sending chickens flying through the dusty air in slow motion. Lines of double-exposed trucks weave trippy patterns to the accompaniment of oompah music. And how does Convoy end? Why, of course, with a mushroom cloud over the Rio Grande.