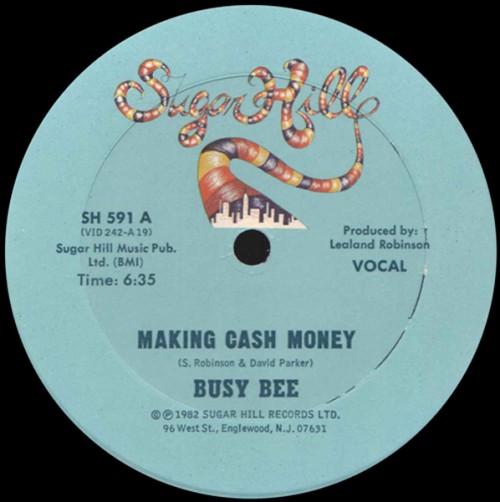 Thirteenth in a series of posts analyzing and celebrating old-school hip hop.

Bernard “Skip” McDonald doesn’t make a lot of noise on Busy Bee’s “Making Cash Money.” At least I’m assuming that’s him — as with a lot of records on Sugarhill — playing in the label’s house band, alongside bassist Doug Wimbish and drummer Keith LeBlanc. (Spoonie Gee’s “Spoonie Is Back,” the year before, had had practically the same instrumental track.) Wimbish is doing all sorts of stunt-plane popping and slapping, and LeBlanc’s doing his usual killer-robot beatkeeping. During the verses, meanwhile, McDonald’s mostly just playing a tiny little guitar lick: a chicken-scratched seventh chord, its tone modified by a wah-wah effect, poking its head up for an instant five times every two bars.

McDonald had been a studio musician for close to a decade by the time of Busy Bee’s single — he’d recorded for Sugarhill boss Sylvia Robinson’s earlier label All Platinum Records — and he had a deep knowledge of the history of R&B. The riff he plays on “Making Cash Money” (and “Spoonie Is Back”) is the one that opens James Brown’s “Funky President (People It’s Bad).” That 1974 hit was, unusually for Brown, not recorded with his touring band (which included guitarist Jimmy Nolen, the guy who’d invented the style McDonald’s using), but with a New York studio group. The “Funky President” guitarists were Joe Beck and Sam Brown, both of whom were jazz musicians. (It’s not clear who played which of its two distinctly different guitar parts.)

“Funky President” was initially released, briefly, as “People It’s Bad (We Got to Get Over Before We Go Under),” before it was retitled after a throwaway reference to Gerald Ford assuming the Presidency. (The basic track for the song was recorded July 17, 1974, three weeks before Nixon resigned.) It’s mostly a call for Black American economic self-sufficiency (“Let’s get together and get some land/Raise our food like the Man”). Any of Busy Bee’s 1982 listeners with a memory of pop that went back eight years or so could scarcely have missed his record’s instrumental allusion to that other song about making cash money.

That allusion’s a commonplace one now — “Funky President” has been sampled on something like 400 tracks — but it wasn’t when sampling technology was still new and expensive enough that most hip-hop artists couldn’t afford to use it. Two years after “Making Cash Money,” D.J. Red Alert would cut Bobby Roach’s exclamation of “Funky!” from “Funky President” into “Hip Hop on Wax – Volume 2”; another two years later, Eric B. and Rakim would lob Alan Schwartzberg’s opening drum-drop into “Eric B. Is President.” As Stetsasonic put it two years after that, “James Brown was old/’Til Eric and Ra came out with ‘I Got Soul.’” You might have heard James Brown played at a party, but in 1982, “Making Cash Money” was about as close as you’d come to hearing someone rhyming over one of the Godfather’s old breaks on a record.