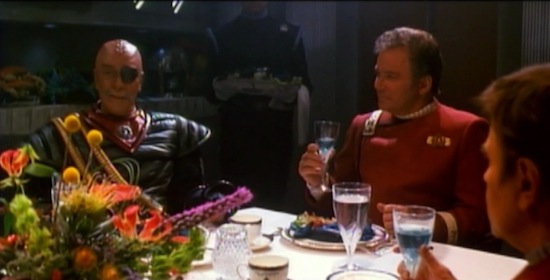 Sixteenth in a series of posts, each one analyzing a single Captain Kirk scene from the Star Trek canon.

I have a motto, “Nothing good comes from blue drinks.” So it’s fitting that the tumultuous journey towards peace between the Klingon Empire and the Federation is toasted with illegal Romulan Ale – seeing that the night results in a torpedo attack and Kirk being framed for the assassination of a Klingon Chancellor. Before the bloodshed, the joy of the Klingon dinner scene aboard the Enterprise rests not only in the racial tension between the Klingons and the Enterprise crew, but comes from watching Kirk, man of action, struggle against his baser impulses to maintain the diplomatic role forced upon him.

At dinner, Chancellor Gorkon toasts to “the undiscovered country, the future” quoting Hamlet (Act 3, Scene 1 — as Spock notes). He speaks of a new era of peace, but for me — a teenage Next Generation fan who worked her way backwards to the original series — Star Trek VI: The Undiscovered Country was a bridge between the two series and my first theatrical Star Trek experience. “You see, the guy who played Worf is going to be in the film playing his own grandfather, Colonel Worf, father to Mogh, killed during the Romulan attack on Khitomer,” I rattled this off in one breath to my father as he drove me to the movie.

The Klingon dinner scene is riddled with moments as delightfully awkward as my teenage self. Klingon warriors fumbling with napkin rings, spouting Shakespeare, and slurping blue squid while the Enterprise crew plasters diplomatic smiles on — and at the center of it all is Kirk. His distrustful eyes surveying the room, his hand in a pensive, chin-scratching position as he struggles to keep his mouth shut. Seated next to Kirk is the duplicitous General Chang, a Klingon so tough his eyepatch is screwed directly into his head. “Directly into his skull!” I exclaimed to my dad, who was probably wondering why I couldn’t be more into MTV and boys like my older sister.

As the dinner conversation heats up, Chang verbally challenges Kirk, but Spock quickly defuses the situation by putting peaceful words in Kirk’s mouth. When Kirk speaks up, Chang rudely talks right over him and, again, Kirk is silenced. As the debate turns to the Klingons’ fear that this alliance will destroy their culture, Chang also quotes Hamlet: “To be or not to be, that is the question which preoccupies our people.” However, when Kirk attributes Chang’s words, “We need breathing room,” to a 1938 Hitler speech, he lands a verbal deathblow from which the screw-patched Klingon cannot recover. Kirk punctuates his punch with a cool sip of blue ale. Even in words, Kirk shows himself to be a man of action. He also shows his prejudice against the Klingons and his journey to overcome that bias will prove every bit as tumultuous as the dramatic events surrounding the peace talks. Kirk’s final cruise as the Captain of the Enterprise was my first, and that makes me biased, but it’s one of his best.

Kelly Jean Fitzsimmons is a New York-based playwright/screenwriter whose recent work has appeared in Liars’ League NYC, Serving House Journal, and the original web series Intersection. She is also the creator and producer of No, YOU Tell It!, a unique reading series that “switches up” the storytelling.