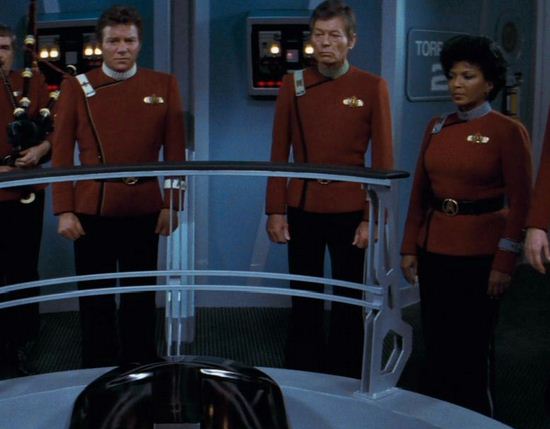 Sixth in a series of posts, each one analyzing a single Captain Kirk scene from the Star Trek canon.

The thing about getting older is, if you live long enough, eventually everyone you love will die. Star Trek II: The Wrath Of Khan is about a number of things, but mostly it’s about getting old, and losing, and death, seen through the eyes of one James T. Kirk. These are heavy themes, and Kirk goes through a lot in the movie, running into old enemies, taking charge of the Enterprise again, and losing his closest friend. Forget, for a second, that the Star Trek franchise undid Spock’s sacrifice in its next film; forget that Spock ended up outliving every other major character from the original series. In context, the Vulcan’s death is devastating, and how Kirk responds to that devastation is one of his defining moments.

The funeral comes after the climax of the film, a battle in the Mutara Nebula in which Khan is finally defeated, destroying himself and his ship in one last attempt at revenge. Khan was homicidal, cunning, and insane; Kirk is the same man he’s always been, able to think around corners, cheat if he has to, and do whatever it takes to come out the other side. That’s why he’s a hero. But while he’s been running around saving the day, he’s also had to struggle against his own mortality, needing glasses to read, suffering from depression, and meeting the adult son he never knew he had. Kirk’s always been able to make decisions in the heat of battle, but to know there’s a conflict coming that he can’t win has to be hard. And then he has to face that conflict, standing on the other side of the glass as Spock rots before his eyes. He does the only thing he can do: stare helplessly and wait for the end.

It isn’t until the eulogy that we get a sense of how Kirk will move on. He’s reserved through the short speech, betraying little emotion; given the man’s usual generosity of expression, that stillness speaks volumes. It’s a gesture of respect. Spock’s stoicism was his chief point of pride, and it’s only fitting that his mourners should demonstrate the same restraint. But there’s also an emotion too strong to be casually expressed. You hear it when Kirk’s voice breaks, just for a moment. That break is more powerful than keening. Then there’s his conclusion: “Of all the souls I have encountered in my travels, his was the most human.” The remark at first appears insensitive: Spock spent his life trying to live up to his Vulcan heritage, and to draw attention to his humanity seems to do him a disservice. But Kirk isn’t trying to diminish his friend. Spock is gone, but the ideals he stood for are worth aspiring to. He was the best humanity can hope to achieve, with patience, wisdom, and sacrifice. So Kirk takes this, and does what he does best: he finds a reason to keep living.

See All Posts by Zack Handlen

Zack Handlen is a writer living in Maine. He has reviewed every single episode of Star Trek and Star Trek: The Next Generation, and is currently working his way through Star Trek: Deep Space Nine; his write ups can be found at The AV Club. In addition, his book If You Like Monty Python is available for sale at many fine stores.