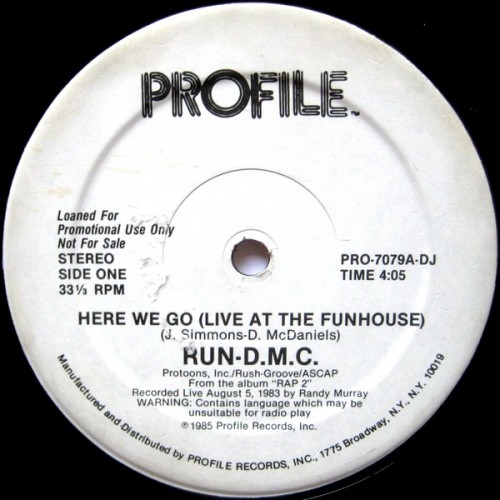 Twenty-first in a series of posts analyzing and celebrating old-school hip hop.

Let’s get one thing straight before we proceed – I know this record was released as a single in 1985. But “Here We Go (Live At The Funhouse)” was actually recorded in February 1983, and it’s a rare example of a single that’s sourced from a live performance (Run-DMC were keen on using turntable wizardry to create songs, “Beats To The Rhyme” for example.) And yes, I know technically Run-DMC as a group in itself is the actual dividing line between the true “Old School” that was disco-rapping and the “New School” Larry Smith-inspired sound that would usher in rap’s first Golden Age. But this song to me is the ultimate testament of the true essence of the DJ/MC dynamic that is hip-hop. And it’s a perfect peek through the window to see the well-oiled machine that was Run-DMC.

Picture this: You’re packed in the sweatbox that’s The Funhouse, one of Manhattan’s most wild and notorious nightclubs of the era. It’s a cold February night but the condensation of everyone’s breath inside is making the walls sweat, the ceiling drip. DJ Run is on stage and asks the crowd “How y’all feel out there” to which you and the rest of the room hoot and whistle as a reply. DMC says “Ah yeah” and then you hear Jam Master Jay start to scratch a powerful kick and snare as he spins the record back and forth, getting ready for launch. After a few more words THE BAND rushes forth into a brand new routine, two turntables and two microphones, powered by the BIG BEAT that is Billy Squier’s “The Big Beat.” On time, locked in tandem, as one, three artists delivering a performance like they’ve done it countless times before.

And then everything gets fucked up.

You didn’t hear it. Nobody did at first, it was only just a split second that nobody would have even picked up on. But it was there, at 1 minute and 10 seconds into the performance. Jay’s hand slipped. Or perhaps the sweat from the room got on the record and made it hard to cue. Or maybe he just wasn’t fast enough (doubtful). Whatever the reason, he missed his cue on the doubles routine. He didn’t bring “Big Beat” back fast enough. It came off beat. Part of Billy Squier’s “Iiiii” seeped through. It could have thrown the entire routine off.

But it didn’t. Jay caught it and went back on beat. I picture Run and D looking at each other and at Jay, aware of the mistake, and they bennnnnnd their words and allow everything to snap back into place as Jay rushes the one turntable back into position. The danger was real, the cataclysm was right there, and it was avoided. And they rocked their way into history.

I believe that one finds perfection in the cracks, in the imperfections. That one moment defines this song to me. A perfect hip-hop song, defined by a flaw. Now picture that.

See All Posts by Cosmo Baker

Cosmo Baker is a Brooklyn based DJ and producer who has been writing about records that people thought they didn't care about for over 20 years now. He's been published in Fader Magazine, Wax Poetics and numerous blogs over the years. You can check him here.