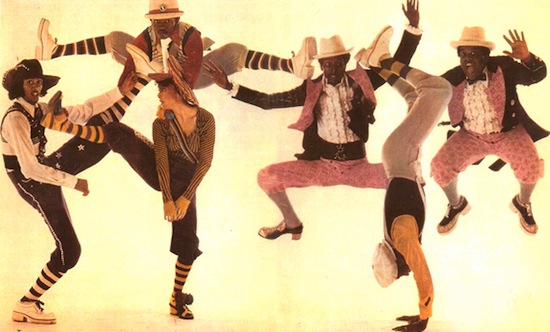 Twenty-fifth in a series of posts analyzing and celebrating old-school hip hop.

It would be hard to make a case that the musical side of West Coast hip hop was a major pop-cultural force before the late 1980s, the contributions of Egyptian Lover and The Future MC’s (or, even earlier, the Watts Prophets) notwithstanding. But when it comes to street dance, an equally important element of the culture, styles invented or perfected in Los Angeles have been influential from the beginning — or even before the beginning, in the case of The Lockers, whose joyous, funk-based style gained national exposure, mainly from 1973–76, through television appearances on Saturday Night Live, The Tonight Show, and specials with Carol Burnett and Doris Day, all nearly a decade before Bronx b-boying hit Hollywood and the cover of Newsweek in 1982–84.

The move the group was named after was invented by Don Campbell, then a twenty-year-old Los Angeles trade-school student, around 1971: Unable to remember exactly how to do the Funky Chicken, Campbell froze or “locked” in position between motions, inadvertently creating what dance historian Sally Banes calls “a framing device that, in the competitive spirit of street dancing, called attention to his performance.” (An offshoot of the style adopted by gay and transvestite clubbers, variously called “punking” or even “Garbo,” became vougeing, but that’s another story.) Campbell’s related instructional record, “The Campbellock,” is tough to track down, though you can hear a fragment of it toward the end of this latter-day demonstration by Adolfo “Shabba Doo” Quiñones, a founding Locker who made a smooth landing in the hip-hop era proper as Ozone in both Breakin’ films.

Campbell and others danced individually (and probably unpaid) on Soul Train, but they were brought together to work as a professional unit by dancer/choreographer/cultural magpie Toni Basil (who has had a hand, or foot, in everything from the T.A.M.I. Show to Talking Heads’ “Once In a Lifetime” and her own “Mickey”). The routines for which they became famous combined the Nicholas Brothers-inspired unison precision of Quiñones and Campbell’s disciple Greg “Campbellock Jr.” Pope, flurries of between-the-beat freakiness, and breakouts for the individual members’ specialties, including the cybernetic jerks of Bill “Slim the Robot” Williams, one progenitor of “popping,” and Fred “Mr. Penguin” Berry’s patented “Master Butt Drop.” (Later, as Rerun on the otherwise stupefying What’s Happenin’, Berry’s dancing supplied some of the only moments of genuine aesthetic pleasure to be found on television during the Carter administration.)

Though the clip included here features Tribe’s steamy 1974 track “Coke,” the variety-show contexts the Lockers often appeared in were rarely this hip; as Basil once said, “Did you ever hear a TV orchestra try to play ‘Jungle Boogie’?” And the cultural politics of their good-natured self-presentation seems quite distant from the volatility associated with other (and later) street-dance styles, from uprocking to krumping, or the “attitude” that’s de rigeur in the form’s recent reappearance on network talent competitions. But the dancing itself is no less bodily and musically engaged for that, nor less exciting and fascinating to watch, and there’s no guessing how many ’70s kids took the Lockers as models for their own moves, and their crews, whether or not they ever went pro or not, and whichever coast, if either, they were born on.