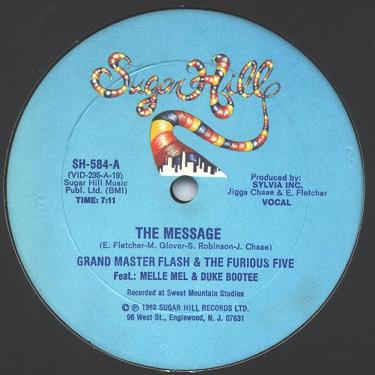 Fourteenth in a series of posts analyzing and celebrating old-school hip hop.

Where were you the first time you heard “The Message,” hip hop’s first socially conscious record? I heard it in September 1982 during my freshman year of college. I had to close my eyes to listen, really listen, to the word-images in the lyrics. Only then was I able to understand the song’s innovation, especially by the third verse:

Neon King Kong standin’ on my back
Can’t stop to turn around, broke my sacrophiliac
A mid-ranged migraine, cancered membrane
Sometimes I think I’m going insane, I swear I might hijack a plane

Up until then, I had always considered hip hop aural wallpaper — like disco. But “The Message” was different; it was like listening to a Norman Lear sitcom with no laugh track.

Years later, the song’s co-writer/producer, Ed “Duke Bootee” Fletcher told the Guardian UK that he was trying to make the lyrics cinematic, in order to broadcast the song’s message: “The neighborhood I was living in, the things I saw — it was like a jungle sometimes in Elizabeth, New Jersey.”

Whenever I listed to the song, in my head a Seventies-era single-screen theater plays loops of urban decay and neglect in Ronald Reagan’s America. I see the opening scene of the 1971 movie Panic in Needle Park, in which junkies gather near 72nd Street to hustle enough money for another fix. I see the Times Square street scenes from 1969’s Midnight Cowboy. I see the burnt-out South Bronx landscape as depicted in Fort Apache, The Bronx (1981). I see Paul Schrader’s Taxi Driver (1976).

“Neon King Kong standin’ on my back” — a monkey-on-my-back addict’s metaphor for Manhattan looming over the rapper’s consciousness — is my favorite line. I wonder if the 1976 remake of King Kong, helped inspire Fletcher’s word choice? I also think of Magilla Gorilla, a late ’60s cartoon about an unmanageable pet shop gorilla; there are those who claim the cartoon lampoons the era’s move towards racial integration.

“A mid-ranged migraine, cancered membrane” torments our narrator, whose obsession with sickness and disease was a common refrain throughout the late ’70s and early ’80s. Remember all those terminal illness movies: Love Story (1970), Brian’s Song (1971), Bertrand Tavernier’s Death Watch (1980), Terms of Endearment (1983)? Does this song foretell the epidemic of AIDS — at first known as the “gay cancer” — that would eviscerate African American and homosexual communities in the years to come?

As for the hijacking lyric — this is perhaps a reference to the 1981 heist movie The Pursuit of DB Cooper, the true story of a hijacker who got away with a pricey ransom and disappeared, becoming a folk hero in the process. Or else a reference to Skyjacked (1972), Superchick (1973), or Airport ’77 (1977)?

“The Message” classified new types of urban distress moving into our cities as the 1980s got started. Some heralded it as a wake-up call, though Melle Mel and Duke Bootee weren’t telling us anything new. They just delivered it in an irresistible new format.