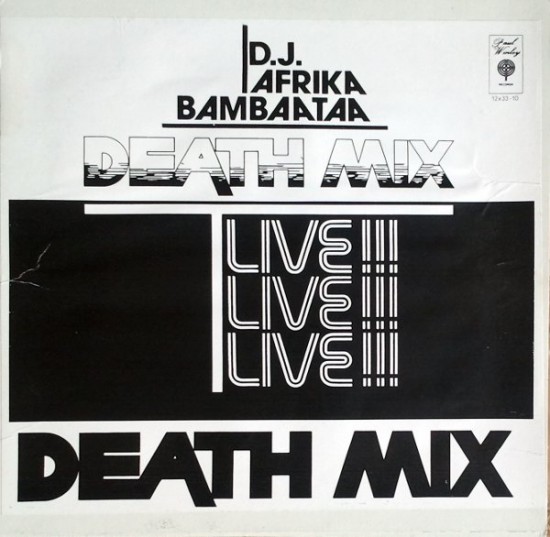 Nineteenth in a series of posts analyzing and celebrating old-school hip hop.

Paul Winley’s blurb on the back cover of 1983’s Death Mix Live!!! 12” is split between stake-claiming, modest contrition, and historical foresight: “If you listen to this record, you’ll know why Africa [sic] Bambaataa is the best D.J. when it comes to cutting and mixing records. I was the first to record Afrika Bambaata [sic] as a record artist, along with the Cosmic Force and the Soul Sonic Force. But I must admit I did not do my best in recording them, but I hope to make up for those mistakes by putting together this record of what I think are some of the best cuts and mixes by D.J. Afrika Bambaata [sic] himself.” Bambaataa had left Winley’s label a couple years previous after getting fed up with Winley adding in superfluous live instrumentation to “Zulu Nation Throwdown,” and with Bam a massive sensation on Tommy Boy two years later, Winley figured he wasn’t above a mea culpa. But he did come up with a priceless one – even though there’s a bit of irony attached.

The irony is that Death Mix Live!!! is, and I am not kidding, one of the cruddiest-sounding recordings ever put out by a legitimate record label. I doubt it’s by design; if Winley had something better to offer than what sounds like a copy of a copy of a copy of an audience recording, I’d like to think he would’ve used it — even if everything about this 12” feels like it’s scrambling to capitalize on Bambaataa’s string of chart-burning hits for Tommy Boy. But for someone to shruggingly admit that he dropped the ball on capturing Bambaataa at his best on the sleeve of a record that sounds as bad if not worse than the fidelity you get by putting a tape recorder next to a TV speaker? The balls on this guy, huh?

And yet there’s a fascinating pull here between setlist and sound quality. It’s a recording from 1980, so there are no Stubblefield/Starks James Brown breaks or “Apache” bongos or other standbys of the cratedigger canon. It’s most telling of the times that the A-side (or “Pt. 1”) actually mixes in a straight-up hip hop record, something that was practically unheard of just a year previous; that the cut is Grandmaster Flash and the Furious Five’s “Superrappin’” must have been both a nod of recognition and a wise-ass callout to the man Bambaataa once helped Grand Wizard Theodore battle at the same venue, James Monroe High School, back around ’76. But on “Pt. 2,” Bam and Jazzy Jay start picking from the funkier corners of circa-’79 dance music: Vernon Burch’s “Get Up” (made famous a decade later when its slide-whistle break acted as the chassis for Deee-Lite’s “Groove is in the Heart”); Yellow Magic Orchestra’s “Firecracker” (an early, acknowledged influence on Bambaataa’s electro foundations); the cowbell-rattling “A Chocolate Jam” by session-player band The Chocolate Jam Co. It’s closer to disco than funk, but it’s a long way from Studio 54 – or the Paradise Garage or the Mudd Club or the Disco Fever or just about anywhere else.

See, the bootleg quality means that scratches sound like Brillo pads, the DJs’ shout-outs echo into borderline incoherence, and the breaks, whether synthesized electro-pop or slick session-band disco, are foggy and swampy — just not enough to derail the groove. Still, what sounds janky on audiophile terms is also, through time and decay and reverb-happy acoustics, a transmission through the firmament. This kind of fidelity’s weirdly fitting for one of the few (if not only) official recordings of a DJ set from the days when hip hop hadn’t yet ceded the spotlight to the MC. It’s distant, hazy, looming off in the distance; on the whole it feels closer to the dub of Studio One than the post-disco live-band jam sessions that the rest of the circa-’80 rap world was putting on wax. Winley didn’t do his best in recording Bambaataa here – except by fascinating accident.

See All Posts by Nate Patrin

Nate Patrin is a resident of St. Paul, Minnesota, and has been listening to hip hop since what is now known as the "Golden Age" but was then known as the era where everyone thought Hammer was going to take over the world. He writes for Pitchfork, eMusic XLR8R, City Pages, and elsewhere.