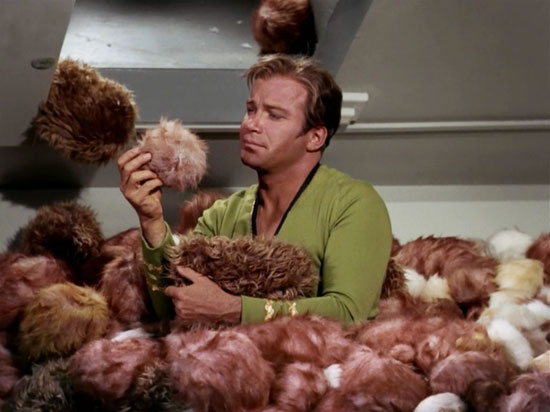 Seventh in a series of posts, each one analyzing a single Captain Kirk scene from the Star Trek canon.

“The Trouble with Tribbles” begins with Kirk in a state of open exasperation. The Enterprise has been ordered to guard a shipment of the hybrid grain quadrotriticale targeted for a terraforming project. (Terraforming doesn’t violate the Prime Directive because it’s aimed at pre-colonized planets. In any case, exceptions to non-interference are made.) Kirk has been known to violate the Prime Directive, or indeed any number of directives, when it suits his purposes. This is part of what makes him such an admirable leader; he’s only rigidly by-the-book when by-the-book is best; he legislates the law with outsider spirit. But here he’s stuck within the letter.

Seeing no plausible reason to go rogue, Kirk must toe the line. But he is careful to only toe; the Enterprise, after all, was built to boldly go. In other words, to hunt, not to gather. Domestic chores like grain husbandry are left behind; what Kirk husbands is his ship.

Kirk flouts the alleged gravity of grain by assigning a minimum guard and allowing his crew shore leave. Uhura, the only female member of the Enterprise C-Suite, beams down to “do some shopping.” Immediately, she is lightly conned into acquiring a space-pet, an intergalactic guinea pig known as a tribble. Now tribbles have two major characteristics, the first being major cute, so of course all the girls want one. But the second characteristic is the kicker. Born pregnant, all tribbles need to breed is an adequate supply of food. For example: grain.

The Klingon Empire makes an appearance but is relegated to the status of subplot, about which the space-villains are clearly unhappy. Federation and Klingon crews provoke cafeteria fistfights, resulting in on-board detentions. Meanwhile, tribbles are massively multiplying, occupying every surface of station and ship, including the Captain’s Chair.

That, for Kirk, is the final frontier.

Every adventurer needs his comic relief. Usually laughs come at the expense of First Straightman Spock, with McCoy and Scotty rounding out the ensemble ribbing. After a long, strenuous episode, there’s nothing better than kicking back on the bridge and taking a few intuitive jabs at logic. Rare is the occasion when Kirk is the target of teasing himself. Kirk has a certain way with the ladies, as female humanoids across the galaxy will agree; but he has no intention of sharing the Chair.

Finally connecting the dots of food, sex and satire, Kirk beams back to the station and opens the overhead grain compartments, only to find that the contents have shifted. Out surges an avalanche of tribbles; I’m sure that when he imagines immersion in female fur, this is not exactly what our Captain has in mind.

The Tribbles have infested the grain and have multiplied at an amazing rate. They’re also dying, because the Klingons have indeed sabotaged the shipment. Our Captain is buried up to his neck in the realization that he was wrong. The joke is — for once — on him. Literally.