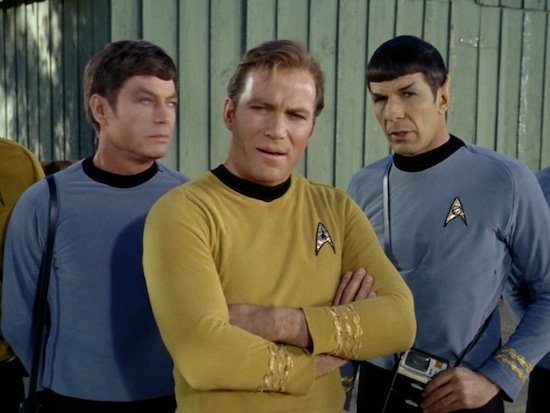 Fifteenth in a series of posts, each one analyzing a single Captain Kirk scene from the Star Trek canon.

It’s a widely accepted truism that McCoy, Spock, and Kirk represent a Freudian Trio: id, super-ego, and ego respectively. If that were the case, then McCoy would be a relentless monster, Spock a moralistic nag, and Kirk deformed by his efforts to reconcile the other two. Sorry, Trekkie pop psychologists, but you’ve misread Freud. It’s not that legitimate Freudian Trios don’t exist: the diner scene in John Huston’s The Asphalt Jungle provides a good example. Kirk, McCoy, and Spock, however, ought instead to be read as a Peircean Trio — i.e., as in the pioneering 19th-century American logician and semiotician C.S. Peirce.

Science Officer Spock proceeds inductively, from particular premises (hard data) to cautiously stated general conclusions; Dr. McCoy, on the other hand, proceeds deductively, diagnosing illnesses and other mysteries by comparing general conclusions (forms and norms that he regards as inviolable laws) with particular premises (unusual symptoms, clues). McCoy’s beef with Spock is the emergency room doctor’s with the ultra-cautious laboratory researcher, and vice versa. Both agree, however, that intuition and imagination have no place in the reasoning process. Kirk, meanwhile, proceeds via what Peirce was the first to name “abductive” reasoning. When it comes to resolving irresolvable conundrums, he relies on a mode of reasoning that makes use of inductive and deductive conclusions… but doesn’t exclude intuition and imagination.

Having arrived on Omicron Ceti III, in the amazing episode “This Side of Paradise,” in order to catalog the destruction of Elias Sandoval’s colony under the bombardment of deadly berthold rays, the Enterprise landing party discovers that Sandoval and the others are alive. What to make of this situation? Their body language says it all.

McCoy, arms deferentially behind his back, signals that he is perfectly willing to accept the pronouncement of medical science on the matter, just as soon as he can feed a few symptoms into his tricorder. “Just an educated guess,” he jokes, “I’d say that man is alive.” Spock, arms akimbo, remains skeptical and sardonic, unwilling to trust either McCoy’s pronunciamento or the evidence of his own senses: “Berthold rays are incontrovertibly deadly… If a man is exposed long enough, he dies.” Kirk doesn’t seek a synthesis of their opinions. He folds his arms, stubbornly resisting both deductive and inductive conclusions before he’s had the opportunity to brood over the matter, in a negative-dialectical fashion, shuffling through the pieces of the puzzle until — in a flash — the entire picture is revealed.

Spock’s inductive reasoning, and McCoy’s deductive reasoning, are valuable — as we’ve seen in many other Star Trek episodes — and abductive reasoning depends on the insights of these approaches. But Omicron Ceti III is a puzzle that only abductive reasoning can solve. (“It’s like a jigsaw puzzle, all one color,” Kirk will muse later. “No key to where the pieces fit in.”) In this scene, Kirk finally says: “Gentlemen, we’re debating in a vacuum. Let’s go get some answers.”

Among other things, Star Trek is an ongoing debate about how one should reason (in the vacuum of space, even). Kirk demonstrates how best to go about it: stubbornly, intuitively, boldly!