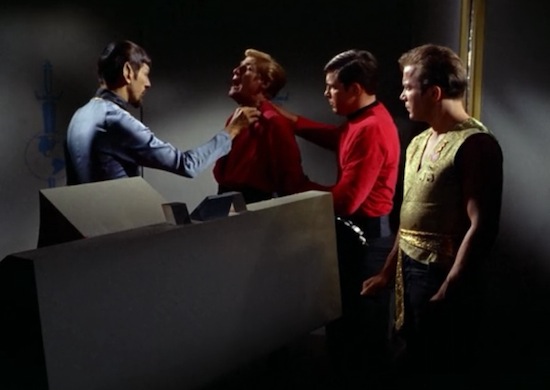 Twenty-first in a series of posts, each one analyzing a single Captain Kirk scene from the Star Trek canon.

Early on in the episode “Mirror, Mirror,” Kirk and an away team are beamed up during an ion storm, whose interference causes them to switch places with their counterparts from an alternate universe — in which, we immediately notice, Enterprise uniforms are accessorized with glinting medals, everyone is visibly armed, salutes are neo-fascistic, and Spock has a beard. What’s worse, it soon becomes clear (when Spock orders a phaser barrage on the pacifist planet below, and when he demands the use of the transporter operator’s “agonizer”) that this alternate Enterprise is operating under a moral code that we might best describe as foreign.

Kirk could countermand Spock’s order to bombard the Halkan planet; and at minimum, he could intervene in Ensign Kyle’s torture-by-agonizer at Spock’s hands. Yet he offers no objections. He stands by, mutely, and the away team follows his lead. Was this cowardice? Certainly not — but his inaction could be explained as a canny stratagem on Kirk’s part. Thrust into an unpredictable situation, Kirk might have merely wanted to let matters play out for a while, until he had an opportunity to assess the situation and make a plan of action. Still, he didn’t know what the agonizer would do to Kyle; and he could have intervened without blowing his cover. Right?

He doesn’t intervene, though — and I’d argue that the true reason for his inaction is foreshadowed in the preceding scene, back on the Halkan planet’s surface. The planetary council has deemed it unethical to allow the Federation to mine its dilithium. As the away team is about to beam aboard the Enterprise, the lead planetary negotiator observes that Kirk and the Federation possess the power to take the dilithium by force. “But we won’t,” Kirk tells him. “Consider that.” Kirk’s non-interference policy respects the Halkans’ pacifistic moral code, despite the fact that it thwarts the Federation’s wishes; moments later, aboard the alternate Enterprise, his non-interference policy respects the ruthless, neo-fascistic moral code of the alternate universe’s barbarian empire — for the moment, anyway.

Non-interference — when applied equally to every context — is perhaps the most frustrating aspect of enlightened, liberal morality. No wonder we cheer Kirk on whenever he is illiberal. I, for one, do not envy him his command.

See All Posts by Gabby Nicasio