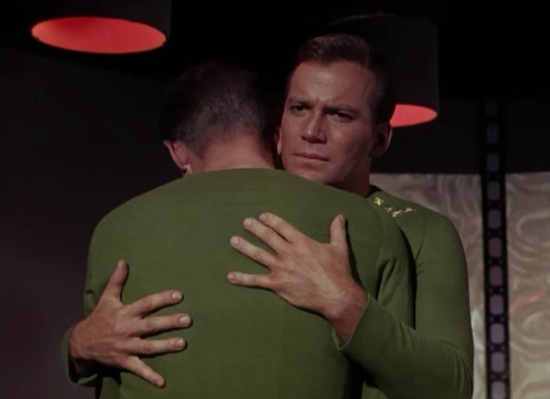 Ninth in a series of posts, each one analyzing a single Captain Kirk scene from the Star Trek canon.

Technology reveals our all-too-fragile humanity — sometimes literally, as Kirk discovers in “The Enemy Within.” As the episode opens, Kirk and Sulu are on the rocky surface of Alfa 177, holding a strange pink single-horned canine, when geological technician Fisher injures himself and is transported to the Enterprise. Scotty, et al., have seen their share of transporter malfunctions, but nothing compared to what is about to go down.

Fisher’s fall has left him covered in a strange yellow ore that causes the transporter to go haywire. Back aboard the ship, Kirk appears dizzy. Scotty takes him to sickbay, ignoring Kirk’s order: “Don’t leave the transporter room unattended.” The unattended transporter energizes and we see someone who looks like Kirk. His back is turned, but it’s definitely him (note the cut of the Starfleet tunic). As if sensing the dramatic and surprising musical cue, the figure turns around — it is Kirk, but he’s lit from underneath, his face all shadowy and sinister; and he’s wearing more eyeliner than Jean Simmons in Black Narcissus or Natalie Portman in Black Swan. The malfunctioning transporter has created two Kirks!

Horny, bad-ass Evil Kirk unleashes his id on the Enterprise and its crew — especially targeting the pretty Yeoman Janice Rand and Good Kirk, who’s about to learn what it truly means to be James Tiberius Kirk. It all comes to a head in the final showdown between Good Kirk and Evil Kirk. Is the latter an impostor, or what Scotty calls “a strange, ferocious opposite”? He’s neither; he’s Captain Kirk’s libidinal energy made incarnate. In a previous scene, Good and Evil Kirk realize they are both aspects of one person: Kirk’s essential “Kirkness” is at stake. Good Kirk is ineffective, indecisive; as Spock tells him, “You can’t afford the luxury of being anything less than perfect. If you do, they lose faith, and you lose command.” Spock is proven right when Evil Kirk takes control of the Enterprise’s bridge, ordering the Enterprise to leave Alfa 177’s orbit, thus leaving Sulu stranded.

Good Kirk arrives, causing Evil Kirk to yell, “I’m the captain! This is my ship! My ship! It’s mine!” Good Kirk’s meek reply — “Can half a man live?” — leads to a scene where Good and Evil are reunited in the transporter room. In the end, Kirk is mended, intact, and ready to command. But this is only the first season, and there are plenty of adventures, near-death experiences, and conquests (explicit and implicit) yet to occur in the upcoming episodes and motion pictures to come. The Kirk that emerges at the end of “The Enemy Within” is familiar — confident, poised, and even mischievous. To get to this point, Kirk had to confront more than just the death of his mind and body. It was not just his life that was threatened; the future of the character we will henceforth know as “Kirk” hung in the balance.

See All Posts by Enrique Ramirez

Enrique Ramirez (twitter: @enriqueramirez) is an architecture critic, historian, and doctoral candidate at Princeton University. His work can be found online at aggregat456.com.