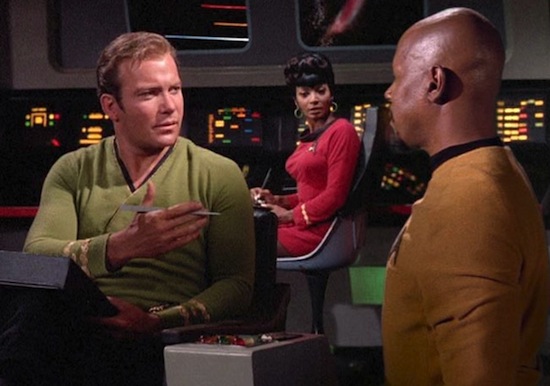 Twentieth in a series of posts, each one analyzing a single Captain Kirk scene from the Star Trek canon.

How will posterity view Kirk? What we know, mostly, of James T. Kirk is from first-hand viewing of his life, but in the DS9 episode “Trials and Tribble-ations,” we’re given a view of Kirk 80 years after he “died” on the Enterprise-B (and two years post his actual death on Veridian III). It is 2373, and Benjamin Sisko is explaining to two agents from Temporal Investigations what happened when the Defiant was sent back in time to 2268, and the first thing they saw was the first U.S.S. Enterprise.

“The one and only,” says Sisko, with unconcealed glee.

Kirk is, even decades after his death, for better or worse, still known, and still known as the Kirk we have followed (and, as posterity tends to make us, for both better and worse).

For men from Temporal Investigations – Kirk has the biggest file on record with their department, with 17 temporal violations – and for a commander like Sisko, yes, it’s likely they would have some knowledge of the man.

However, Sisko’s knowledge goes a little deeper. He mentions Kirk’s reputation as a ladies’ man, and even Kirk’s fight with the Gorn – he’s heard the stories, he’s paid attention. But Sisko is a serious man, with a serious job to do (and it’s an amusing irony just how serious the DS9 crew’s mission is as they move in and out of the most famous comedy episode of TOS). So he does all he can to not pay attention to James T. Kirk.

Until his mission is finished. Then, as he tells the investigators, he does something quite unnecessary, but that he has been longing to do since he first saw the Enterprise.

Dressed in his 23rd-century uniform, he goes to Kirk on the bridge, gets him to sign off on a duty roster (Sisko is, wonderfully, a very bad actor), and responding to Kirk’s query about being new says he’s just there on temporary assignment, and tells Kirk it has been an honor serving with him. Kirk nods, politely, disinterestedly, tells him to carry on, and Sisko beams like he’s won a great prize.

Now, this could just be something for the fans, Sisko acting like a longtime Trekkie approaching The Actor Who Plays James Kirk for an autograph and barely able to get his words out. But if we can (and we should), we can allow ourselves in that same moment to look at James T. Kirk through the eyes of Ben Sisko, without the baggage of 46 years of Star Trek history, or our feelings about That Actor. If we can just let ourselves do that, let all of that go – the jokes, the clichés, That Actor — we can see James T. Kirk anew, as he deserves to be seen, with respect, as a commander, as a legend. As a hero. It is one of Kirk’s greatest moments of glory, and he’s not even really “there” for it.