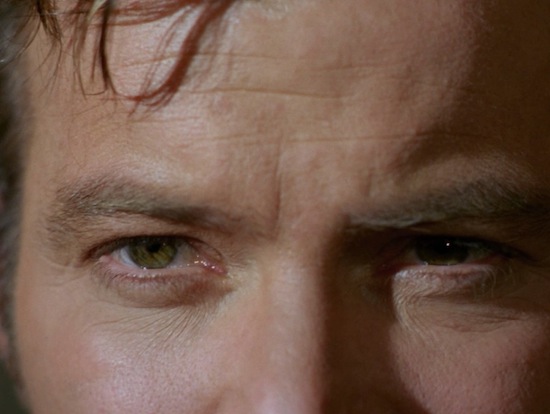 Twenty-second in a series of posts, each one analyzing a single Captain Kirk scene from the Star Trek canon.

Arrogance comes from an over-inflated sense that one’s methods and vision are superior. Pridefulness, though, is usually found in those who feel the least empowered — and who therefore behave in extremist ways. Captain Kirk is sometimes arrogant, but don’t be fooled. Despite his extreme unwillingness to bend in the face of overwhelming odds, he’s no prideful extremist.

In “Let That Be Your Last Battlefield,” two black-and-white aliens from the planet Charon have brought their 50,000-year struggle to the bridge of the Enterprise. Bele, a single-minded policeman in search of “traitors,” has been hunting Lokai, a revolutionary who claims his people have been oppressed. Bele is intent on taking Lokai back to Charon for a trial; Lokai asks for political asylum. Kirk tells them they are going back to Starfleet, where Lokai will be charged with stealing a shuttlecraft, and any political grievances will have to be taken up there.

Bele represents a prideful sense of right, a monochrome belief at odds with his dual-colored body; Lokai and his ideas of freedom are a cancer that will sow chaos along what Bele sees as perfectly ordered and engineered society. Therefore, using his ability to manipulate electric fields and a telepathic will, Bele takes control of the ship and steers it towards Charon. Kirk finds himself powerless, unable to wrest control of his ship from Bele. In a move that shocks even his own crew, he calls upon the computer to initiate the ship’s self-destruct sequence.

Kirk’s willingness to destroy the Enterprise and kill the 400+ men and women aboard looks, on the surface, as though it’s born of injured pride. However, although Kirk might perhaps be accused of arrogance — for assuming that his own mission is superior to any cause over which these aliens might be fighting — he’s not prideful. Threatened by death during the self-destruct countdown, Kirk doesn’t waver, whereas Bele does. Unlike Bele, a prideful being who ultimately values power (and survival) over doing the right thing, Kirk is willing to die — so long as doing so is the only reasonable course in the face of unreasonableness. This isn’t extremism… unless Socrates’ willingness to drink the hemlock is extremism.

Spock is often described as stoical, but Kirk is the true stoic aboard the Enterprise — his will a firm anchor to the just and good.

See All Posts by Peter Bebergal

Peter Bebergal is the author of Too Much to Dream: A Psychedelic Boyhood (forthcoming from Soft Skull Press) and co-author of The Faith Between Us. He blogs at mysterytheater.blogspot.com.