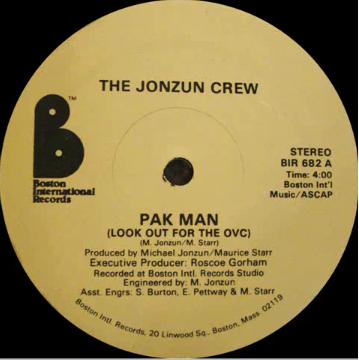 Fifteenth in a series of posts analyzing and celebrating old-school hip hop.

Jonzun Crew’s “Pak Jam” is now a seminal electro hip hop classic that exploded both on the West Coast and overseas. “Pak Jam” initially began as just another Boston Funk single that was first played on Boston area radio stations before finally being pressed up by Michael Jonzun and his brother Maurice Starr on their indie label Boston International Records. However, “Pak Jam” underwent a few changes before it became an international hit in 1983. For one? It had a different name. “Pak Jam” was originally called “Pak Man (Look Out For The OVC)” when it first became a smash in Boston between 1981 and 1982 before it was finally pressed up.

Michael Jonzun and Maurice Starr had produced for several New York acts and had even had several record deals (both independent and major) before “Pak Jam” landed on Tommy Boy Records. Their friend and hometown associate Arthur Baker (they were previously in a group together called Glory) had recently moved to New York and shared Jonzun Crew’s “Pak Man” with Tommy Silverman since they were all part of the same record pool. Silverman loved what he heard but he changed a few things before he re-released it on Tommy Boy, after which it could be played in all of the clubs and radio stations in New York. From there, the song could spread throughout the Northeast and possibly become a hit. Little did anyone at Tommy Boy know how big of a hit or how influential “Pak Jam” would be.

The thinking is that Tom Silverman requested “Pak Man” become “Pak Jam” in order to avoid any legal action from Bally/Midway who owned the rights to the 1980 video game Pac-Man. Michael Jonzun maintains that he had never heard of the video game when he initially came up with the old title.

“Pak Jam” was significant for several reasons. For one, it was the first song in urban or popular music to feature a vocoder as the lead voice (Stevie Wonder & Roger Troutman both used Talk Boxes). This led to many popular songs in 1983 emulating the effect — such as Newcleus’ “Jam On It,” Arthur Baker’s “Planet Rock,” and even Midnight Star hits like “Freak-A-Zoid” and “No Parking On The Dance Floor.” Before you knew it, poppers and lockers on the West Coast were rocking to “Pak Jam.” Shortly thereafter, “Pak Jam” exploded overseas. Thus began Jonzun Crew’s run of making and producing international hits — including New Edition’s “Candy Girl,” later the same year.

The Boston Funk of “Pak Jam” paved the way for Planet Patrol’s “Play At Your Own Risk,” Jonzun Crew’s “Space Cowboy,” then Arthur Baker crafting (or Kraftwerking) Afrika Bambaataa & The Soul Sonic Force’s “Planet Rock” — which helped hip hop go global. What we knew as Boston Funk is now recognized as Electro (or Electro Funk) and it was all over the radio and the Billboard charts by 1984 once hip hop finally went mainstream. All hail the unsung innovators.

See All Posts by Dart Adams