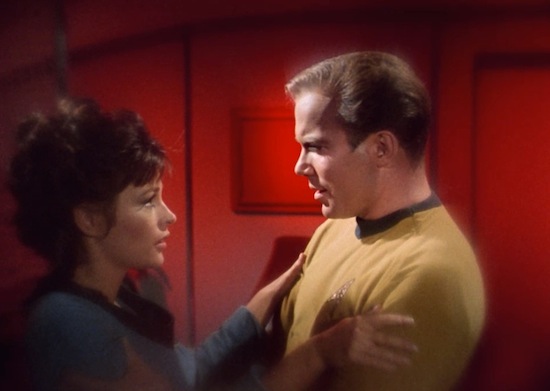 Nineteenth in a series of posts, each one analyzing a single Captain Kirk scene from the Star Trek canon.

He: Elevator, and going down quite a ways.
She: I wouldn’t recommend it for weak hearts.

And so the dance begins. With Captain Kirk and potential conquest Dr. Helen Noel, a ship psychiatrist, in “Dagger of the Mind.” No matter what alien world, time/space paradox, monsters within or without, Kirk never missed a chance for a good double entendre. These terse, witty moments in Star Trek, effortless asides that flit and skate and flirt about, encapsulate a power struggle within the innuendo.

He: Shall we leave it up to the doctor?
She: Since you brought me down here for advice, Captain…
He: One of the advantages of being a Captain, Doctor, is being able to ask for advice without necessarily having to take it.

Kirk is on the lurk: a combination of amusement, leer, sportsman on the hunt, from sly to hammy. A wry delight in all its manifestations. No matter what hand-wringing conundrum at the center of each episode, you knew Kirk was destined for another notch on his ladykiller belt.

Dr. Noel and Captain Kirk have history, maybe. It is never clear beyond the time Kirk “dropped in” on a science lab Christmas party aboard the Enterprise. She tries to push the memory a bit.

She: Perhaps it would be simpler if you called me Helen, Captain, since…
He: This is another time, another place, another situation.
She: Of course, Captain.

Dr. Noel also asks Dr. Adams, the whirligig-eyed villain of the episode, to call her “Helen.” In the nascent feminist times when the show aired, she seems to be trying to remove the distinguished title from her name — and is largely ignored. Or perhaps she just wants to be “one of the boys” — Scotty, Bones, Spock, Sulu, and of course, Jim.

Dr. Adams is explaining his work with the criminally insane in his floating space prison: “Part of the cure, if you will, Captain, is to bury the past. Why should a person go on living with unbearable memories if there’s no necessity. Oh, I feel quite sure that you’d concur with me in that, Doctor. Helen.”

Apparently she does not concur. When faced with an opportunity to slip a suggestion into Kirk’s mind (via the hypnotizing machine at the center of the plot), Dr. Noel first tries Hunger, then playfully moves on to: What Happened That Night When You “Dropped In.” Kirk falls into a reverie of that night. Is the moment real or fictive? He remembers — or imagines — a moment when he carried Noel back to his cabin and embraced her. In the reverie, Noel pulls back — wanting, girl that she is, to know what it means.

She: Of course, it would be different if you cared for me.
He: You want me to manufacture a lie, wrap it up as a Christmas present for you?

Noel gets it, and gives in.

Chivalry with a smirk.