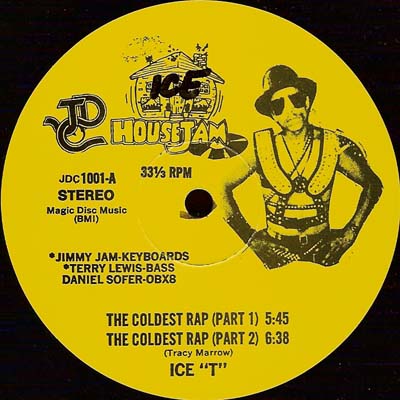 Twenty-third in a series of posts analyzing and celebrating old-school hip hop.

The history of hip hop holds only a handful of personalities like Ice-T. As we all know he currently plays a police detective on Law & Order: SVU without a whiff of irony toward his days being vilified by Law Enforcement nationwide for singing “Cop Killer” with his metal-core band Body Count. Before forming Body Count, Ice-T released several classic hip hop records (e.g., Rhyme Pays, Power, The Iceberg, and O.G. Original Gangster), the first of which was the first record ever to bear a Parental Advisory sticker. And let’s not forget that Jay-Z’s “99 Problems” (2003) were Ice-T’s in 1993.

Prior to being the unsung pioneer of what became “Gangsta Rap” (what he called “Crime Rhyme”), Ice-T was bringing New York to L.A. His early classics sounded like Schoolly D or BDP’s Criminal Minded. The West Coast didn’t have its own recognizable sound yet. No “Gangsta Gangsta,” no O.G., no G-Funk, the sounds of these streets weren’t shaded by palm trees and red and blue bandanas. To do rap meant to sound like New York.

Ice-T’s first single, “The Coldest Rap”/”Cold Wind Madness (a.k.a. The Coldest Rap, Part 2)” consists of a two-part rhyme-fest of boastful wordplay. The single is backed with “Body Rock,” an electro-dance number that puts in extra work trying to explain what hip hop is all about. Past all of the playful posturing and woefully dated structure, one can hear the seeds of Ice-T’s lyrical heyday. His distinctive delivery, his cadence, his occasional turn of phrase, and his gift for innuendo all shine through, hinting at his future success on the mic. “The Coldest Rap” is a player anthem, a party song, a hip hop trope that Ice-T would revisit throughout his recording career. The power production team of Jimmy Jam and Terry Lewis, who were then core members of Morris Day’s band, The Time, as well as close associates of Prince, provided the backbone for the track. They stretch out a bit on Part 2, but Part 1 is all Ice-T’s, though the track originally had female vocals on it. “They stripped the girl’s vocal out,” he told Wax Poetics in 2010, “gave me the instrumental, and I rapped over it that night in the studio.” In spite of the single’s inauspicious origins, Ice-T sounds as authoritative as ever, if not as focused as he would become a few years later. “Those were just some rhymes I had in my head,” he said.

Among Ice-T’s subsequent songs was one for the Breakin’ soundtrack, a movie he also appeared in as a rapper, cementing a link to screen work that would continue to shape his career 30 years on. He remains one of the very few rappers who have stayed relevant on screen after his raps grew stale, and it all started with “The Coldest Rap.”

See All Posts by Roy Christopher

Roy Christopher marshals the middle between Mathers and McLuhan. He was assistant editor of Paul D. Miller a.k.a. DJ Spooky’s Sound Unbound: Sampling Digital Culture and Music (MIT Press, 2008), and his first book is Follow for Now: Interviews with Friends and Heroes (Well-Red Bear, 2007). He is currently working on a book called The Medium Picture (for Zero Books), and another called Hip-hop Theory. He is also a Visiting Lecturer at The University of Illinois-Chicago. He writes regularly at roychristopher.com.