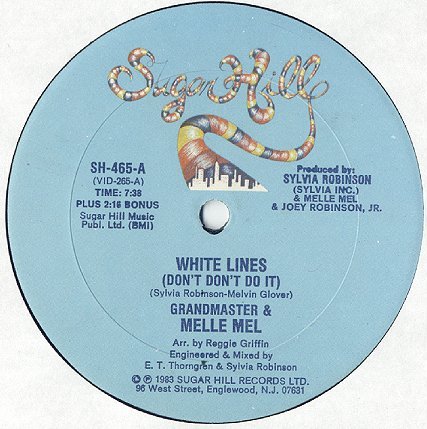 Twentieth in a series of posts analyzing and celebrating old-school hip hop.

The introduction is deceptive: a spectral voice intoning “fun baby,” followed by whispers and electronic bleating. Ghost timbales enter, “Freeze! Rock!” echoes, four-part harmony teases “higher” unto a feral growl: it’s Melle Mel — the most powerful voice in rap — and a nine beat riff so hot he declaims “Bass!” before it comes again and the funky drummer locks in. The groove is irresistible, addictive, and after the vocal play of “Something like a phenomenon (baby!)”, Melle Mel — also rap’s sharpest lyricist — explodes. Cautionary, celebratory, both? Whatever “White Lines” means, poet Charles Olson’s dictum nailed it: “He who controls rhythm, controls.”

Manufactured since the 1860s, cocaine entered popular American discourse in 1885, when it became known Ulysses S. Grant was taking it to ease the pain of terminal throat cancer. Even after the drug’s early 20th century regulation, it remained subject of numerous songs, including Luke Jordan’s rambling “Cocaine Blues” (1927); the Memphis Jug Band’s admonitory “Cocaine Habit Blues” (1930); Slumber Nichols and His Western Aces murderous “Cocaine Blues” (1947). More recently, Thomas Pynchon’s Gravity’s Rainbow (1973) was suffused with cocaine psychosis and one well-timed sneeze in Annie Hall (1977) mocked the drug’s common banality. Richard Pryor — nearly immolated while smoking cocaine in 1980 — came back with “Freebase,” from Live on the Sunset Strip: “And when I first did it, I knew it was gonna fuck me up. Stud just had to be hip…”

In October 1983, if someone said they’d heard “White Lines” before, they weren’t lying: though credited to Sugar Hill co-owner Sylvia Robinson and Melvin Glover (Melle Mel), musically, it was largely a cover of funk/dub band Liquid Liquid’s recent club favorite “Cavern.” Sylvia Robinson, not for the first time — in 1979, “Rapper’s Delight” jacked Chic’s “Good Times” wholesale before the band’s lawyers stepped up — was a thief. It was Richard McGuire’s bass line Doug Wimbish of Sugar Hill’s uncredited house band played; likewise Scott Hartley’s drum pattern as appropriated by Keith LeBlanc. Lest this be thought coincidence, “Something like a phenomenon” and other parts were lifted from Liquid Liquid vocalist Sal Principato. When Sugar Hill aggressively refused settlement, Ed Bahlman, owner of Liquid Liquid’s label, 99 Records, filed suit.

Only Melle Mel would triumph, with “Beat Street” and “Vice,” from the #1 hit Miami Vice soundtrack, though even there Sylvia Robinson stole songwriting credit from… Doug Wimbish. (“That’s when I had to get a lawyer and a gun,” he’d later recall.) Its mob-brokered distribution deal with MCA gone predictably awry, Sugar Hill Records declared bankruptcy in 1985 and Liquid Liquid, since dissolved, got nothing.

In 1995, everything changed. Hearing of Duran Duran’s forthcoming “White Lines” cover, Richard McGuire — now a successful artist and illustrator — hired a lawyer and afterwards, Liquid Liquid had one-third of “White Lines” publishing. In 2002 another twist came when Spike Lee — who made a “White Lines” video on spec back in 1983 — included both “Cavern” and “White Lines” in his film 25th Hour.

Brian Berger is a historian, journalist and poet. He was co-editor, with Marshall Berman, of New York Calling: From Blackout to Bloomberg. He is at work on a new book, Brooklyn Confidential, an underworld history of the borough from the nineteenth century to the present, to be published by Doubleday.