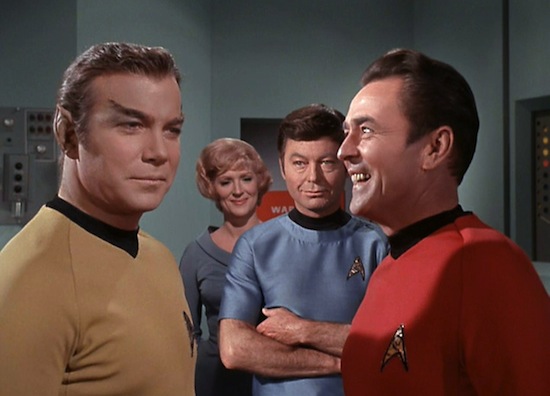 Twelfth in a series of posts, each one analyzing a single Captain Kirk scene from the Star Trek canon.

In “The Enterprise Incident” Capt. Kirk enters screwy as Capt. Queeg, and exits smirky as Zap Brannigan. Here the narrative tries (and fails) to balance a story of interstellar espionage that veers from romantic tragedy (with alluring Romulan commander) to pointy-eared farce. Though Kirk is secretly acting on Federation orders, it’s hard not to see his usual maverick virtues as an expression of Federation (read: American) exceptionalism. He’s kind of a dick, untroubled by his actions, and blind to any moral quandaries he’s forced upon Spock.

When we first saw Kirk squaring off with the Romulans (in “Balance of Terror”) he outwitted his rival using stratagems dating back to the submarine warfare of WWII, and indeed, Kirk seemed to embody that era’s virtues: resourcefulness, cunning, coolness under pressure. But here Kirk curdles over with Federation entitlement. The Neutral Zone? Merely a guideline, easily tossed aside if there’s an opportunity to steal a cloaking device.

As the story opens, Kirk is for once not recording the captain’s log – Dr. McCoy is. That’s because Kirk’s behavior has become increasingly erratic and unhinged. He’s mad! Mad, I tell you. When the Enterprise goes lurching into the Neutral Zone the Romulans seem irritated and put-off, rather as if they’ve found Federation frat boys puking on their cosmic lawn. Kirk and Spock beam over to the Romulan ship to parlay, where Kirk goes fully barmy and Dr. McCoy is brought over to declare him unfit. Relieved from duty, incensed by these betrayals of Spock and McCoy, Kirk must be put down with the Vulcan Death-Grip.

’Tis all a ruse, however. Spock runs a Honeypot on the Romulan Commander (her lustruous chestnut mane worthy of a Mrs. Robinson in Space), while Kirk is returned to life — and surgically altered to appear Romulan. He beams back aboard the Romulan vessel and absconds with a large table lamp which we are supposed to believe is a cloaking device. While Kirk scampers about the Romulan ship with a lamp tucked under his arm, Spock and the unnamed Romulan commander engage in a spectacularly erotic game of Alien Finger Dancing (let this euphemism take root in the culture). Spock stalls his own execution long enough for Kirk to beam back to the Enterprise, where Scotty is given approximately twenty seconds to figure out and implement unknown technology from a hostile alien race. He succeeds in time for Spock to be transported back to the Enterprise with the Romulan commander clinging to him as their prisoner.

Cloaking device engaged, the Enterprise zigs and zags out of the Neutral Zone with the entire crew chortling as if they just pranked the Dean instead of violating an intergalactic treaty. Dr. McCoy orders Kirk to sickbay to have his “ears bobbed.” Spock musters his dignity in the face of another racist round of pointy-eared jokes and contemplates the emotional cost of whoring himself out for the Federation while his captain exits snickering in glee.