Twenty-fourth in a series of posts, each one analyzing a single panel from a Jack Kirby-drawn comic book.

If the Id were a statue covered in magic paint and if the Id lived in a remote Balkan village, and if the Id were approximately 30 feet tall, this is what it would look like. Oh, sure there are long-term desires — conquering the world, enslaving the populace, banishing your enemies to other dimensions — who of us hasn’t daydreamed and even, in my case at least, made contingency plans in case I succeed? But that’s the trap of having dreams: there’s always a “when” before you can relax, and that prevents happiness in the present day. Desire sets the wheel of Karma in motion, and the suspension of fulfillment between now (you know, the sheer bloody joy of being able to hypnotize earthlings with a single glance) and then (domination of the galaxy) is where you get bitten in the ass. A puny human tricks you into sleeping for eternity, or it turns out you’re a sentient tree and they don’t have termites on your home planet, or a cowardly-seeming scientist uses a radio he just invented to call your parents to use a giant grappling hook to take you back to your star system, weeping all the way. No, you can’t win, you never do. Death or the moral universe takes you to task. Until then, the way of the sage is work without effort, the way to do is to be. That’s how I strive to live.

And yet, I don’t really live that way. The Id isn’t going away, pal. And you know what? The Id can’t stand the Tao. They’re enemies, and right here, in this panel from Journey into Mystery #72 (September 1961): look who’s losing! Screw you, enemy of desire! I, The Glob, crave food, FOOD!, and thus I am now eating a turkey. I’ll be back with you in a sec.

This is one of the rarest things — a Kirby panel in which desire is actually fulfilled. That kind of thing is dangerous and doing it yourself, as an artist, is one of those 10-for-difficulty triple axel double gainers of a problem. How do you suspend narrative, even for a moment, without it feeling slack? I haven’t yet figured out fiction’s accompanying solution to comics’ easy answer: have Kirby draw it. The Glob isn’t attacking here. He isn’t lurching, isn’t dynamic, isn’t threatening, no propelling forward. But somehow, it’s not a quiet scene (even when Kirby drew lovers in afterglow, they looked like they were ready to pistolwhip each other at the click of a gat). But nonetheless here is a signal moment of narrative disc braking. There is literally no reason for this panel in the story; Lee or Lieber didn’t even have dialogue for it. Sure, there’s more to say: we can learn a lot about perspective from the three villagers running away, and sure, we can speculate whether Kirby kept drawing monsters in front of overtimbered houses because of his awful German winter of Infantry experience, and sure, someone braver than myself will wonder just a little bit about why such an Id-like creature looks as if he’s fleeing the set of a bukkake film. But really I’m mostly interested in this rare moment of rest. Well done, Kirby; well done, Glob.

It won’t last for him, you know. Later (SPOILER ALERT) magic turpentine will thin the magic paint, conquest plans are dismantled, there will be agony, hopelessness, the usual. It ends for him as it ends for us. The Glob, like all of us, all of us who aren’t Marvel superheroes, dies. Forever.

But for now, the Glob is simply — rampage on hold — eating a turkey. Because it makes him happy. As it does me. 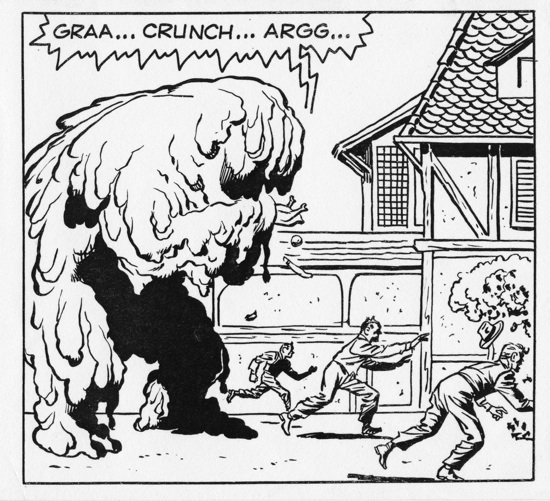 Glen David Gold is the author of the novels Carter Beats the Devil and Sunnyside. He has written extensively about Jack Kirby, most prominently an essay in the landmark Masters of American Comics museum exhibit.