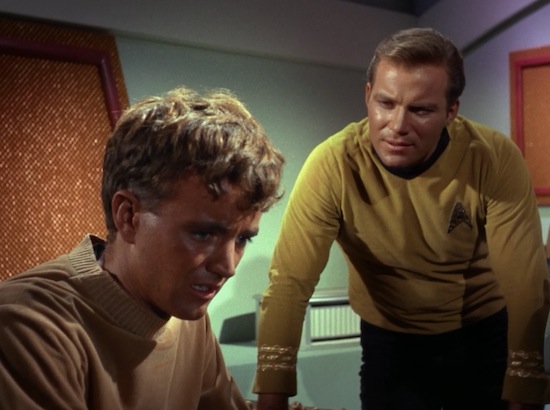 Fourteenth in a series of posts, each one analyzing a single Captain Kirk scene from the Star Trek canon.

The Captain Kirk moment that’s had the greatest influence on me isn’t one that’s going to be replicated in any nightclub impressionist’s act. It’s simply too atypical of what people think of Star Trek — yet for me, it’s just about the philosophical bedrock of the program.

In “Charlie X,” the Enterprise picks up an interstellar orphan with a lot of adolescent desires and no social skills to speak of. As it turns out, he’s a handful in more serious ways, too — ones that place him in good company with Billy Mumy’s Anthony from The Twilight Zone. But before the true extent of Charlie’s awful powers becomes known, he’s basically a sullen cross for the ship’s crew to bear — especially Kirk, who rises manfully to his role as the father figure the boy so obviously needs.

Just about every TV series of the 1960s had its own what’s-the-matter-with-kids-today episode, but “Charlie X” isn’t typical hippie-punching. (We had to wait two seasons for that.) Kirk could easily look down on Charlie as an immature nuisance; instead, he treats him as what he ostensibly is, which is an in-progress human being who deserves the respect of being told the truth. About midway through the episode, beginning to despair of Charlie’s lovestruck simpering after Yeoman Janice Rand, Kirk lays down some knowledge with brutal but beneficent frankness: “Charlie, there are a million things in this universe you can have, and there are a million things you can’t have. It’s no fun facing that, but that’s the way things are.”

Charlie doesn’t listen, but oh boy, do we. In just the second episode aired, writers Gene Roddenberry and D.C. Fontana have revealed the adult foundation beneath the gee-whiz idealism that’s too often taken as the sum total of the Trek experience. That experience is customarily construed as one defined by unlimited possibility — infinite diversity in infinite combinations, and all that rot — but in Kirk’s world, quantities like satisfaction and fulfillment are distinctly finite. They may be obtainable by every person, but certainly not in every instance. Maybe not even close.

Yes, that’s counter to the popular image of Trek. It’s also at cross purposes with the very medium of television itself, which depends on the illusion that the entire universe is available to the viewer as long as he keeps watching TV. Kirk’s big “Charlie X” moment teaches the exact opposite: You can go where no man has gone before, or you can stay tuned to NBC until you become one with the sofa. But either way, there are doors that just aren’t going to open for you, because math.

The Captain Kirk who raised me trusted me to recognize that imagination and good will don’t automatically win you every race. The best you can hope for is that they’ll put in a good word for you with the law of averages.

See All Posts by Steve Schneider

Steve Schneider is a critic, columnist and humorist based in Orlando, Florida. He is a regular contributor to OrlandoWeekly.com, where he writes about television, film, theater, music and the intersection of popular culture and public policy. He holds a Master's degree in media, culture and communication from New York University. He has been called “smart” by Roger Ebert, “brilliant” by several readers who asked to remain nameless, and “the defendant” by the New Jersey Department of Juvenile Justice.