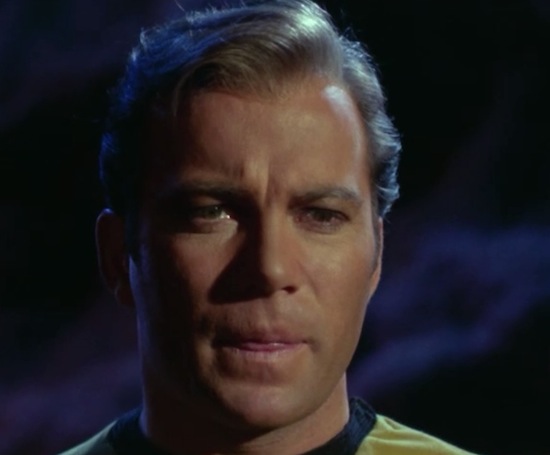 Eighteenth in a series of posts, each one analyzing a single Captain Kirk scene from the Star Trek canon.

The situation is not unfamiliar to veterans of Enterprise landing parties: existence hangs in the balance. A drug-crazed McCoy has leapt through a time portal into humankind’s barbaric past (the early twentieth century, to be precise), where he has disarranged some hinge of history, marooning the away team in an alternative future in which there is no Enterprise, no Earth.

Kirk had already indicated a cavalierly curiosity about time travel: “Strangely compelling, isn’t it,” he has mused — “to step through there, and lose oneself in another world?” applying to metaphysical precariousness the same kind of sybaritic sangfroid he might give to an Orion slave girl’s decolletage. But when moments later McCoy makes his desperate leap, Kirk’s bemusement is tempered to mettle. He knows that the only way to darn the fabric of time is to follow Bones into the past and stay his hand. He and Spock will go, of course, leaping into an alternate universe in which World War II might never happen and Joan Collins might become a serious actor. And in the moment before leaping into the beyond, placing a possibly unbridgeable gap between himself and the only universe he has ever known, he turns to address Uhura, Scotty, and a brace of hapless reds: “When you think you’ve waited long enough,” he intones gravely, “each of you will have to try it. Even if you fail, at least you’ll be alive-in-some–past — world” — applying that Kirkian verbal staccato deaccelarando that empathizes and anesthetizes, commands and soothes.

Later, back in the past, Kirk will allow a woman he has fallen in love with to step before an onrushing truck, keeping her winning, peace-loving ways from interrupting the flow of time. It’s not Kirk’s tragic abnegation that haunts, however, so much as his tempered command at the brink, his enterprising grace, mingling insouciance and existential dread. The captain brings his crew back from the edge of forever, of course, depriving the multiverse of an infinite series of Kirks. Or perhaps he does proliferate, fracturing on transit through the time gate into a radiating probability tree of certitude and sang-froid. A comforting thought: Kirk as the cosmological constant, distributed in space-time, cool competence knitting together the cosmic foam.