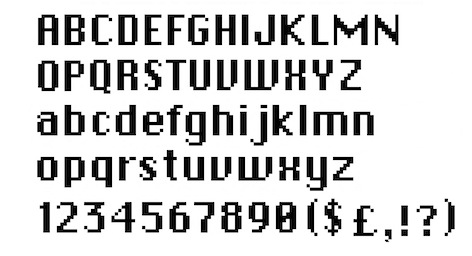 One of 25 installments in a series of posts analyzing and celebrating a few of our favorite (and least favorite) typefaces. NOTE: This is one of the 25 most popular posts ever published at HILOBROW.

It was square, squat, and inherently cute. It was friendly. It was easy to use. I’m talking about the beige box with the blue grinning face that came to live with us in 1985. But I’m also talking about the font that came with it. It was the typeface Chicago that spelled out “Welcome to Macintosh,” ushering us into a new age of personal computing. But it was also a new age for digital type. Here was a typeface created explicitly for the Macintosh, part of designer Susan Kare’s strategy to customize everything from the characters to the icons — that happy computer, the wristwatch, an actual trashcan — to make it feel more human and less machine.

Most of us couldn’t quite put our finger on what made these letters so different. But the secret was in the spaces between the letters. Chicago was one of the first proportional fonts, which meant that instead of each character straining to fill up pixels in a specified rectangle, the letters were allowed to take up as much or little space as they needed. It was more like a book than a screen. For the thousands of families who brought this radical new technology into our homes, Chicago helped us feel like the Mac was already speaking our language.

Maybe it was because I was so used to it greeting me, guiding me through every decision — chirping up in a dialogue box confirming that I did, indeed, want to shut down. But when I began writing on the computer, at age eight, Chicago was the typeface I used. I was mostly writing poems about trees during this period, and I’d bring the text into MacPaint where I could illustrate them using Kare’s paintbrush icon, sweeping the page with basket-weave patterns and single-pixel polka dots. Sometimes I’d click over and scroll through the available typefaces — New York, Geneva, Monaco — and reject each one not only on looks, but on principle. As a kid growing up in suburban St. Louis, Chicago was the only place on the list I had been.

Eventually, Apple retired Chicago, commissioning a new typeface, Charcoal, as a kind of homage to Chicago’s functionality. But I would be reunited with Chicago one last time: Due to its excellent readability at low resolution, Chicago was the font used on the black-and-white screen of the very first iPod. Once again, it was the typeface to welcome early adopters. Those of us who’d learned to type on a Mac were greeted by a familiar font on our first portable music players, cheerily guiding us as we spun the clickwheels in wonderment.

For its newest operating system, released this year, Apple chose Helvetica Neue. It is a choice meant to graduate us into yet another new world, of Retina displays in glassy tablets, where style wins out over substance. This world is also generic and cold. I type thousands of words into my screen every day, rarely pausing to specifically mourn the loss of Chicago. But I often wonder what happened to that smiling computer who used to greet me from the other side of the screen.

See All Posts by Alissa Walker

Alissa Walker is the Urbanism Editor at Curbed.