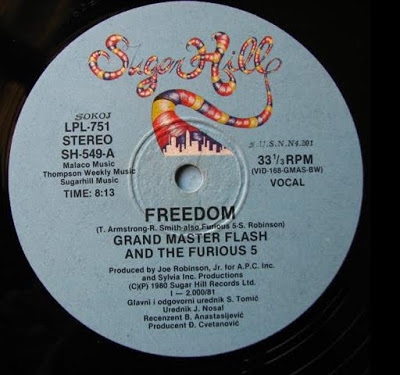 Seventh in a series of posts analyzing and celebrating old-school hip hop.

It typically ain’t a golden age if you know you’re in it at the time. Rap exploded after 1983, and the renegade artform is the entertainment empire of our century, but following the fuse back to its source takes you into much less burdened times, and the purity of what was hoped for.

“Red, yellow, black, white or brown, in our own way, we can all get down,” rapped the Furious Five in their inaugural hit “Freedom,” but keeping to our own ways was the religion of 1980 when the song first dropped; this was an attempt at, or an instinct toward, utopia by example.

The unselfconsciousness of a pioneering form of mass invocation in an enforced radio regime of packaged pop formula; the willed optimism of a rainbow’s colors running together in the blockaded New York and America of five-minutes-to-Reagan; the tenacious festivity springing from a real-life landscape that would only grow more devastated by drugs and other epidemics in a decade of social disregard — this was rap’s revolution as set forth in “Freedom,” the garden if not the golden age.

It had to be fled from eventually, but before MCs started shooting each other we had the friendly rivalry of excellent equals, Melle Mel, Mr. Ness, Raheim, Kid Creole and Cowboy (Flash is not actually on the recording) trading epic boasts of talents there was room for each of. When they get to the playful callout of zodiac signs, it’s like a nursery rhyme for people departing childhood but heading, hopefully, for what the stars foretold.

The Seventies were said to be a decade in which we lost our way, but we were really just forgetting to “know our place”; soul and nascent techno and musique-concrète city-noise sound-effects mingled in the Five’s oeuvre with the ancient chant, the recent hucksterizing, the modern annunciation of rap to call us all to the carnival.

What the stars really held was different; white artists boosting as much of the sound and cred as they could carry off, and a country that got a lot more divided before it got mixed in, and militant and millionaire rappers having to take the mass media by storm rather than invitation.

The Furious Five themselves were chronicling desperation in due course (“The Message,” “White Lines”), and the celebratory world they thought they came from was wiped away. But not its record. A calendar century later, with its high-end micro studios and pluralistic politics and persistent social competition, it’s easy to see their homemade tech and heartfelt optimism as prehistory. But there can only be good feeling in remembering who tried to get the party started.