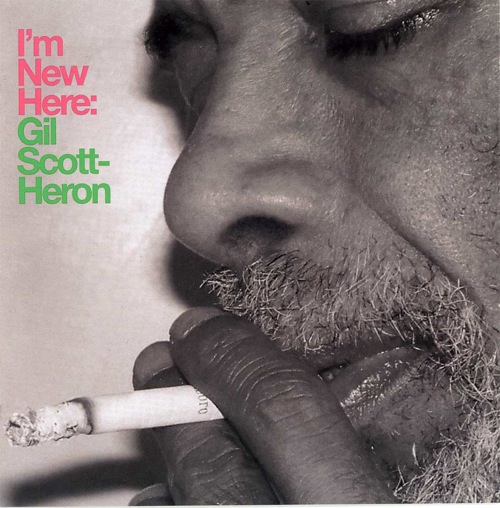 Had GIL SCOTT-HERON’s (born 1949) superb I’m New Here not come out recently, this might have been a threnody. Sixteen years had passed since his previous album, 1994’s invigorating Spirits; more than a decade lay between that and its predecessor, Moving Target. In the interim he’d been adduced “proto-rap” — reductive praise for America’s greatest living blues singer but that doesn’t get it all either; Scott-Heron’s brilliance is too vast to summarize. His 1970 debut, Small Talk at 125th and Lenox, set the lyrical tone, a black Phil Ochs via Langston Hughes, “Whitey On The Moon” with spare percussion grooves. His 1971 follow-up, Pieces Of a Man, was the musical future, with pianist/composer Brian Jackson’s avant soul-jazz arrangements allowing Scott-Heron to speak and increasingly sing of everything: “The Revolution Will Not Be Televised,” “Home Is Where The Hatred Is,” “Who’ll Pay Reparations On My Soul,” “We Almost Lost Detroit,” “B-Movie,” an epic evisceration of Ronald Reagan and more. Then darkness veiled his eyes. In November 2001, as New York State prisoner number 01R5191, Scott-Heron began serving eighteen months for “Crim Poss Contr Substance 5th.” In July 2006, as 06R3165, twenty-six months more; again, possession of cocaine. Which travails make I’m New Here all the more staggering. He stares down Robert Johnson and Bobby “Blue” Bland, tries to write a letter but can’t get past “Dear Baby, How are you?” He triumphs anyway. Welcome back, brother.

READ MORE about members of the Blank Generation.