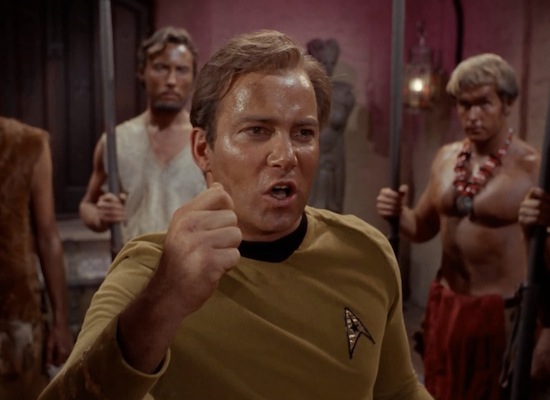 Seventeenth in a series of posts, each one analyzing a single Captain Kirk scene from the Star Trek canon.

“The Omega Glory” episode climaxes with a quintessential Kirk moment. Caught in the middle of a battle between two primitive tribes — the Kohms and the Yangs — Kirk, Spock, and McCoy deduce that the planet Omega IV is a parallel version of Earth, the Asiatic Kohms are the descendants of Communists, and the Nordic Yangs the descendants of Americans (Yankees). This deduction is proved right when their Yang captors produce an ancient American flag and recite a garbled version of the “Pledge of Allegiance.” Recognizing that the flag and the “holy words” kept in a locked box — and on behalf of which the Yangs are fighting and dying — have lost all meaning, Kirk proceeds to excavate that meaning. “We… the PEOPLE,” he begins. I’m assuming you know the rest.

Kirk’s delivery of the speech is much mocked as evidence of William Shatner’s “bad” acting. But far from being an example of incompetence, it is the epitome of Shatner’s very rightness — both as an actor in general, and as the lead actor on this particular television series.

Star Trek is not The Waltons, however much the succeeding five Star Trek series tried to steer in that direction. As originally conceived by Gene Roddenberry, the show was a space opera modeled on the Horatio Hornblower series of seafaring adventure novels. It is a stone’s throw from the Flash Gordon serials. Such a milieu merits an acting style as big as its set pieces; if you don’t act big, you are going to be upstaged by the white gorilla with the rhinoceros horn. This is the stuff of melodrama and there’s no indignity in that. Our ancestors thrived on melodrama and its stylized acting conventions. Though it may have gone out of fashion, melodrama is a style — an artistic choice, and therefore neither a priori “bad” or ineffective. If you’re playing James T. Kirk, melodrama is a job requirement.

For several years at the beginning of his career, Shatner was the fair-haired boy of theatrical director Tyrone Guthrie at the Stratford (Shakespeare) Festival of Canada. He was the understudy of Christopher Plummer in a Stratford production of Henry V (“We few, we happy few, we band of brothers”), subsequently played Henry in another production, and he went to Broadway in Marlowe’s Tamburlaine. So he knew how to make a speech land, to invest it with music, and to make an audience listen. His task in “The Omega Glory” was not only to make the Yangs hear the Preamble to the U.S. Constitution for the first time, but to make us hear it as though for the first time. At the height of the Cold War, the words signified an alternative to a life behind barbed wire; they needed to be delivered with force and weight. So Shatner invested the speech with a little of the old St. Crispin’s.

Alas, by the 1970s — when people started making fun of Shatner — most Americans had never seen a play in a theater. Though he was the right man for the job, it was his misfortune to excel at an art form that had died.

See All Posts by Trav S.D.

Trav S.D. (Travis Stewart) is best known for his books "No Applause, Just Throw Money: The Book That Made Vaudeville Famous" and "Chain of Fools: Silent Comedy and Its Legacies from Nickleodeons to Youtube" as well as his historical pop culture blog Travalanche (travsd.wordpress.com). He has written for The New York Times, The Village Voice, American Theatre, Time Out New York, and many another publication. Hire him for your next birthday party or Bar Mitzvah.