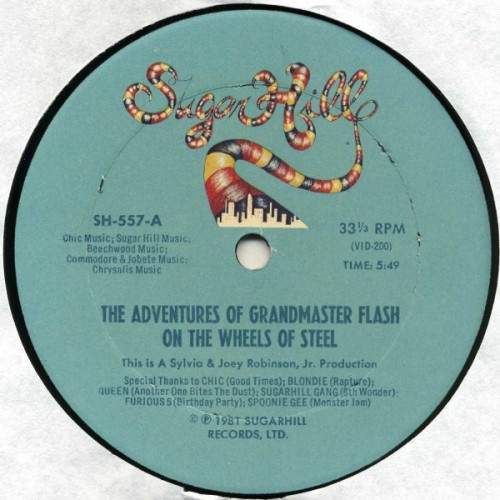 Twelfth in a series of posts analyzing and celebrating old-school hip hop.

One day, three turntables, four takes, twelve different records: this is what went into “The Adventures of Grandmaster Flash on the Wheels of Steel.” Flash may have risen to fame with his Furious 5 crew but this single was his and his alone, a remarkable distillation of hip hop’s past, present and future into one seven-minute epic. It was a song with voices but no rappers, samples but no sampler. Instead, Flash mixed together a dozen records in real time, piecing together what remains one of the greatest DJ documents ever committed to record.

When “The Adventures” dropped in 1981, there was nothing else on the musical landscape quite like it; DJs pioneered hip hop’s sound but the post-“Rappers Delight” era was all about the MCs; DJs had to play the sideshow. In one sense, “The Adventures” was actually an homage to rap music’s 1970s heritage of park jams staffed by quick-mixing disc junkies. “Old” favorites such as Chic’s “Good Times” and Queen’s “Another One Bites the Dust” get heavy spin on here, as did Flash and the Furious 5’s own records such as “Freedom” and “The Birthday Party.” However, while Flash was deliberately pulling out party crate classics, the deft way he stitched them together felt undeniably contemporary (for 1981).

His scratching was basic but he possessed an impeccable sense of rhythm and timing as he builds anticipation, literally by hand. Digital sampling wouldn’t become readily available for another five years but the ways in which he scratch-stutters Spoonie Gee’s “you say” over and over at the song’s beginning predicted the kind of punch-pad “chopping” techniques that producers would later wield on machines like the SP 1200 and MPC 60.

More significantly, at a time where hip-hop was rewriting pop music’s conventions on a seemingly daily basis, “The Adventures” advanced a cut-and-paste patchwork aesthetic that would soon become the norm. Now, any bits from the musical past could be disassembled and reconstructed into new sounds and narratives; pop didn’t just have to eat itself, it could also sprout new bodies.

For all its innovations, my favorite moment on “The Adventures” is seemingly the most old-fashioned. Almost exactly halfway through, Flash begins to play part of the dialogue from The Hellers’ “Life Story,” where you hear a child’s voice ask, “why don’t you tell me a story?” That question, asked by countless children every night, expresses a simple desire for the unknown, a yearning to be taken somewhere. And that’s exactly what “The Adventures of Grandmaster Flash on the Wheels of Steel” accomplishes with its form of storytelling, built from snippets and slices but enrapturing all the same. Even now, thirty years after its creation, its power to delight and transport the listener feels hardly diminished; you love to hear the story, again and again.

See All Posts by Oliver Wang

Oliver Wang is an associate professor of sociology at CSU-Long Beach and writes on music and culture for NPR, KCET's Artbound and his own audioblog, Soul-Sides.com.