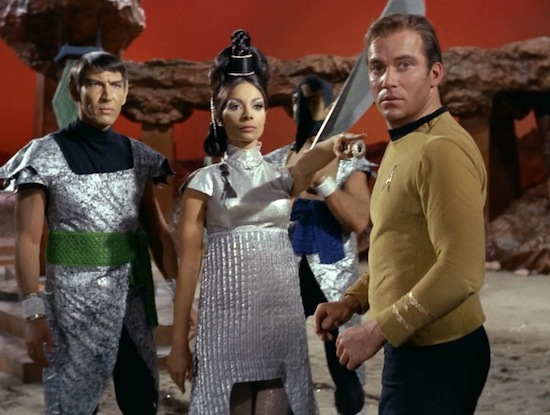 Eleventh in a series of posts, each one analyzing a single Captain Kirk scene from the Star Trek canon.

“Amok Time” is the canonical TOS episode of great slashiness, the place where a million fanfics about Spock’s green-spined penis were born — but “Amok Time” isn’t really about Spock (that’s “Journey to Babel”). It’s about Kirk, especially the wedding-slash-fight scene at the end.

Well — not at first. Kirk is remarkably passive when he first gets to Vulcan. Following the Prime Directive? No. Kirk’s not an anthropologist (xenologist?), he’s an adventurer, and he’s not so dedicated to the rules that he wouldn’t break them if he were given a reason. He’s pleased to meet famous T’Pau, impressed by her, but — like an American meeting a foreign head of state — maybe not impressed enough. He’s not quite ready to try and mack on T’Pring, not just because she’s his buddy’s sort-of wife, but also because she’s not in the category of real person to him. She’s part of the show. Come to Vulcan, see a koon-ut-kal-if-fee!

You can see from the line of Kirk’s spine the moment he changes from spectator to actor. It’s when he becomes implicated in what’s going on, when he has to face the fact that whether he wants to or not, he’s taking part in Spock’s culture’s weird traditions. Suddenly he’s scared and defensive, even though he doesn’t yet know that his fight will be to the death. (“That’s T’Pau of Vulcan — all of Vulcan in one package. How can I back out in front of her?”) He knows that Spock has chosen to identify with his Vulcan heritage, knows further that Spock’s own biology is forcing him to do it. How can he betray his friend by refusing to take part? But how can he take part successfully without knowing the culture — or what to do? And how can he agree to take part in a fight which seems ridiculous or even morally reprehensible under his own system of values?

Kirk acquits himself well enough in the end — when he finally fights Spock, he flops and flails and makes sure that his nipples are bled across with maximum artistry. You can almost see the hamster wheel in his head turning — if I act like I’m getting really beaten up, will this stop? He manages to cue Bones to use a neuroparalyzer to get him out of his impossible dilemma and snap Spock back to Federation-approved reality.

It’s kind of miraculous. But it doesn’t actually make Kirk learn anything. The brief flash of fear we see in him when he’s forced to confront a truly foreign culture with foreign values is just that: a brief flash. He’s an adventurer, not an anthropologist, and he’s on to the next planet with his little posse of fellow humans, with Mr. Spock in tow.