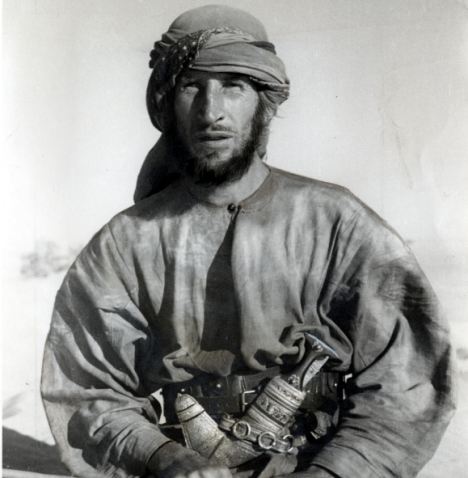 British explorer WILFRED THESIGER (1910–2003) was born in Abyssinia at a time when childhood dreams of adventure could still be realized. Packed off at age nine to be educated at Eton and then Oxford, he abandoned polite society as soon as he could to seek not fortune but an unburdening and a return to the “barbaric splendor” of memory. Among the classics of literary travel writing that ensued is Arabian Sands (1959), which describes his five years exploring the Empty Quarter of the Arabian Peninsula, and The Marsh Arabs (1964), a tale of his travels by canoe in the Mesopotamian marshlands between the Tigris and Euphrates. An ascetic and romantic, Thesiger thrived on “the silence that we have driven from our world”; physical hardship that barely skirts the masochistic; and the company of tribal men in the Saharan desert, the marshes of southern Iraq, in Yemen, Persia, and Kurdistan. His travels with Bedouin guides by foot and camel through the Empty Quarter, in order to map the area for Britain’s Middle East Anti-Locust Unit, offers intimate impressions of life among his Bedu companions — and insights into how deprivation and danger, for him, were varieties of sensual pleasure. He knew firsthand that the map was not the territory, that the Empty Quarter was not empty at all but contained quicksand hungry enough to devour a herd of goats, dunes 1,000 feet high that mocked and repelled any attempt to traverse them, and tribes who killed and castrated their enemies and wore necklaces of the severed body parts. Thesiger lived through these adventures to see: his birthplace become Ethiopia (he was invited to Haile Selassie’s coronation by the emperor himself); Range Rovers and oil derricks mar the Saharan landscape; and the vast Iraqi marshlands drained by Saddam Hussein. “I craved the past, resented the present, and dreaded the future,” he said halfway through his long life. In addition to being courageous he was prescient.