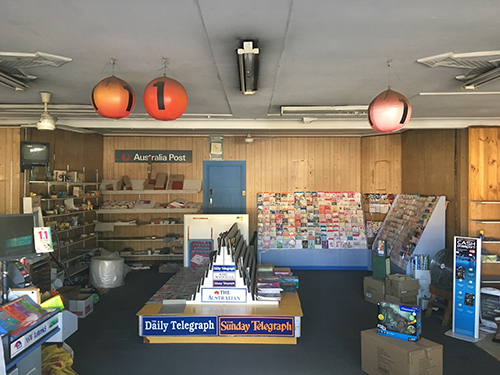 Newsagencies are in the twilight phase of their existence. Before too long the day will come that glossy magazines and ribbon rosettes blink out of use, and cluttered local newsagencies stocking newspapers, magazines, stationery and greeting cards will finally disappear. Before this happens I am keen to visit as many as possible.

Did I say keen? I mean obsessed. Whenever I am out I scan unfamiliar shopping strips, and drive ever-more convoluted routes in the suburbs surrounding my home city of Sydney, Australia. This is in order to make a sweep of as-yet-unvisited newsagencies, in search of the time-capsule ones. Why? Well, come with me.

Look out for the shop front that has lottery advertisements and newspaper headline posters sandwiched between wire racks, broadcasting already-old news from this morning. We’ll go in, past the front counter where the brisk trade in lottery tickets keeps the cashier distracted. Even if they notice us, our enthusiasm for the shelves of dusty stationery items beyond the racks of magazines and greeting cards will hopefully be regarded as nothing more than mild eccentricity.

Some signs of a true time-capsule newsagency are readily observable, such as a faded inflatable red Lotto ball hanging from the ceiling, or advertisements for magazines now out of circulation. A closer search provides the most reliable indicator that the stock has remained consistent since the 1980s. Among the stationery, usually on the lowest shelf, a plastic stencil of the continent of Australia, with perforations for state boundaries, and lines carved out for rivers. A message embossed across the western side of the continent advises “Tasmania to be drawn freehand”. As a child I interpreted this directive as prophetic: I knew I wanted to live a freehand life rather than the one outlined by the stencil.

In the early part of my life newsagencies were all about magazines, which furnished me with an escape hatch from a suburban life in which it seemed nothing much could happen. I’d pounce on the British music newspapers, the NME and Melody Maker. They would appear three months after their publication, and there was no way for me to hear the more minor of the bands that were exalted or decried within their pages. I’d have to go the freehand route, and imagine what they sounded like. I’m not nostalgic for this experience, exactly, but instead for its sense of possibility, that a place as mundane as a newsagency might act as a portal.

Then, they transported me to other places. Now, I use them for time travel, back into an object-led world. A time-capsule newsagency holds onto the potential of visiting cards, telephone book covers, rolls of fax paper, and desk caddies, as if there might still, somewhere, be someone who finds such things useful. Every time I make sure to buy at least one small redundant item. As my cache of Letraset, scented notepaper, airmail pads and small plastic tubes of glitter grows, so does my affection for these defiant preservers of analogue daily life.