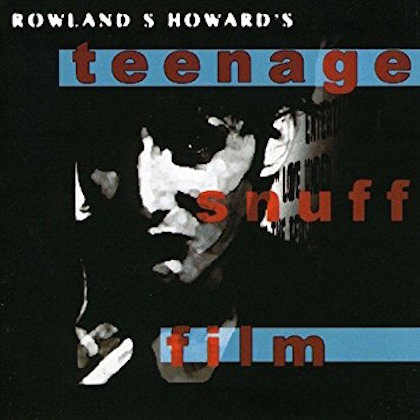 The room had sparse furniture: one long, sagging couch; a coffee table with a clutter of mugs and ashtrays on it; and a record player in a cabinet in the corner. Out the narrow window was a view of the weeds that grew in profusion in the humid Sydney weather. We weren’t the gardening kind. We spent idle afternoons drinking coffee and listening to records, doing our best to pretend we weren’t living in the late 1990s but in a bohemian time of our own making.

One afternoon Vic came home looking wild-eyed, upset. I put my mug down on the table and asked what had happened. He said he’d found out something distressing: “Rowland S. Howard is working in market research!”

There was a silence. That was the kind of dead-end job one of us might do, not one of our idols. The thought of the otherworldly, rakish Rowland S. Howard confined to a call centre was horrible to contemplate.

Whether or not this rumour was true, it wasn’t the only thing Rowland S. Howard was doing in the late 1990s. He was also recording his first solo album, Teenage Snuff Film. By then Howard had been a musician for more than twenty years. He was best known as having been a member of the Birthday Party: his shapeshifting guitar sound wrapped their songs in barbed-wire. But after the band broke up and Nick Cave’s star ascended, Howard’s fortunes wavered. In the 1990s he was playing to tiny pub audiences in Melbourne, and the recording for Teenage Snuff Film relied on the goodwill of producer Lindsay Gravina, who snuck the sessions in around those of more profitable artists.

Teenage Snuff Film doesn’t sound like it was recorded in 1999. It comes from a private universe: the songs have a hypnotic cool. They weave together the threads of Howard’s life — romance, addiction, desire, cigarettes, Coca-Cola — into a world more akin to one of a film or a novel than a rock album. With a layered sound, lush with strings and organ, and wry, deadpan lyrics, the songs navigate adversity and its transcendence. The gentle “Autoluminescent” declares it: “I was a nightmare,” Howard sings, “but I’m not gonna go there, again.” The album tells us of the nightmare: broken relationships, faded notoriety, drugs. But Howard emerged on the other side of all of this, and these songs glow.