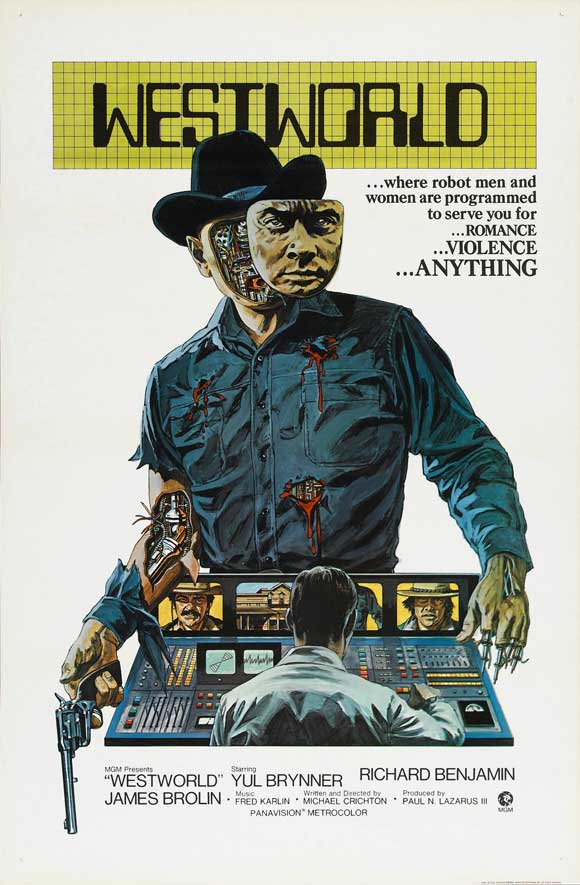 Perhaps you saw me in Westworld
I acted like a robotic cowboy
It was my best role
I cannot deny I felt right home deep inside
That electronic carcass.
— Stephen Malkmus, “Jo-Jo’s Jacket”

The silvery, shining eyes. The programmed, terse lines. The persistent, if measured, gait in pursuit of humans to eradicate. If anyone tells you there’s a better element to Westworld than Yul Brynner’s role as the Gunslinger? They’re wrong.

I’ll admit, my affinity for Brynner isn’t solely rooted in his performance in the film in question. It actually goes back 17 years earlier to The King and I. As a person in the world in the year 2020, I know that The King and I is rooted in extremely problematic moviemaking of the time — casting non-Asian people in Asian roles, awkwardly telling stories of white supremacy couched in the catchy songs of a musical. As a person in the world in the year 1990, we’d borrow VHS tapes of musicals from my neighbor. I watched a lot of his VHS musicals, but none of them stuck like The King and I, and no one’s role was as crucial to me as Yul Brynner as King Mongkut of Siam.

There’s a quote he says in an interview, how shaving his head liberated him from “stupid vanities” and how it “opened a lot of doors.”

I have to believe one of those doors led to playing a homicidal robot cowboy.

Watching the Westworld of 1973 is a far cry from the dense, intricate (and I would venture to say, laborious) storytelling of its cousin, HBO’s Westworld. The original, in comparison, has a hollowness to it. What was intended as the technology of the time is now camp, and it’s challenging to not carry that camp across its characters. Despite that, what seems to connect the two is the persistence and bloodthirst that the robots of the current-day Westworld share with Yul Brynner’s Gunslinger.

The Gunslinger’s role is to provoke, providing vacationing tourists the opportunity to get in a bar fight in a saloon and then presumably exchange gunfire. Every time, the Gunslinger comes back with his same teasing lines, his same cold delivery. It’s when he begins to cross over, to pursue Peter and John, his motivations become more than just instigation. All of his daily deaths are about to be repaid with theirs.

One third of the movie is dedicated to the Gunslinger following Peter across the various fantasy worlds of Delos — there’s no rush to his walk, there’s no quickening of his pace. He methodically stalks him from Westworld, to Romanworld, to Medievalworld. His facial expressions do so much to show his emotions, pat phrases are disposed of.

So much of King Mongkut’s appeal was dramatics, flair, a raised voice. The Gunslinger has his own unrelated to any of that. While I love both characters, I know in the end my true love is for the man free from vanity and hair atop his head.