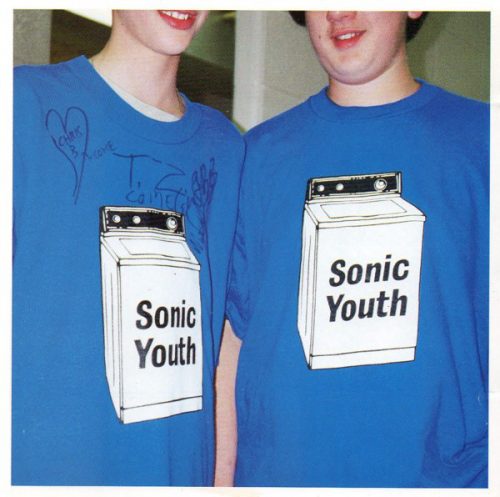 I was twelve when I found it — a cassette tape with two guys in blue t-shirts badly cropped on the cover. They were photographed with a flash, like something from a disposable camera. Sonic Youth Washing Machine, the band name and title thinly identified on the spine. I didn’t really know what graphic design was at that point, but some of my own origin story must have to do with that album art.

At that age, in 1995, I had no idea who Sonic Youth were, but the name of the band sounded cool. I was starting to read SPIN magazine. I haunted the AOL SPIN message boards, creeping posts by actual SY fans. Reading all of that as a teen indicated to me that be a fan of them meant you had a line on some sort of effortless cool. You didn’t even have to try, you just were.

When I put the cassette into the player I didn’t realize I was starting on Side B, so my experience didn’t begin with Kim’s plaintive whirlpool of “Becuz,” it began with Thurston’s temper tantrum of “No Queen Blues.” It was so noisy, crunchy and abrasive, but I was hooked. I listened to the whole tape, in the wrong order, and I loved it.

Little did my teenage brain realize that Sonic Youth had been a band before I was even born. I had a lot of catching up to do – listening to the older records, cracking open a whole world of other musicians and bands, clothing collaborations, artists whose work was repurposed by the band as album art. Sonic Youth rocketed me into an infinite galaxy of cool, and I wanted to float through it forever.

When Kim & Thurston broke up in 2011, effectively ending any new work by the band, I was devastated. It was like my own parents broke up, given the amount of texts and calls I received and how I felt. Their relationship is no one’s business, particularly mine, but I found them so aspirational – the band! The art! The creative partnership!

Now as an adult, years out from the first notes of “No Queen Blues,” I get it. They’re human. Galaxies split off into their own worlds, sometimes. Cool doesn’t make you immune to the human condition, it’s just something you can put on like an old cassette.