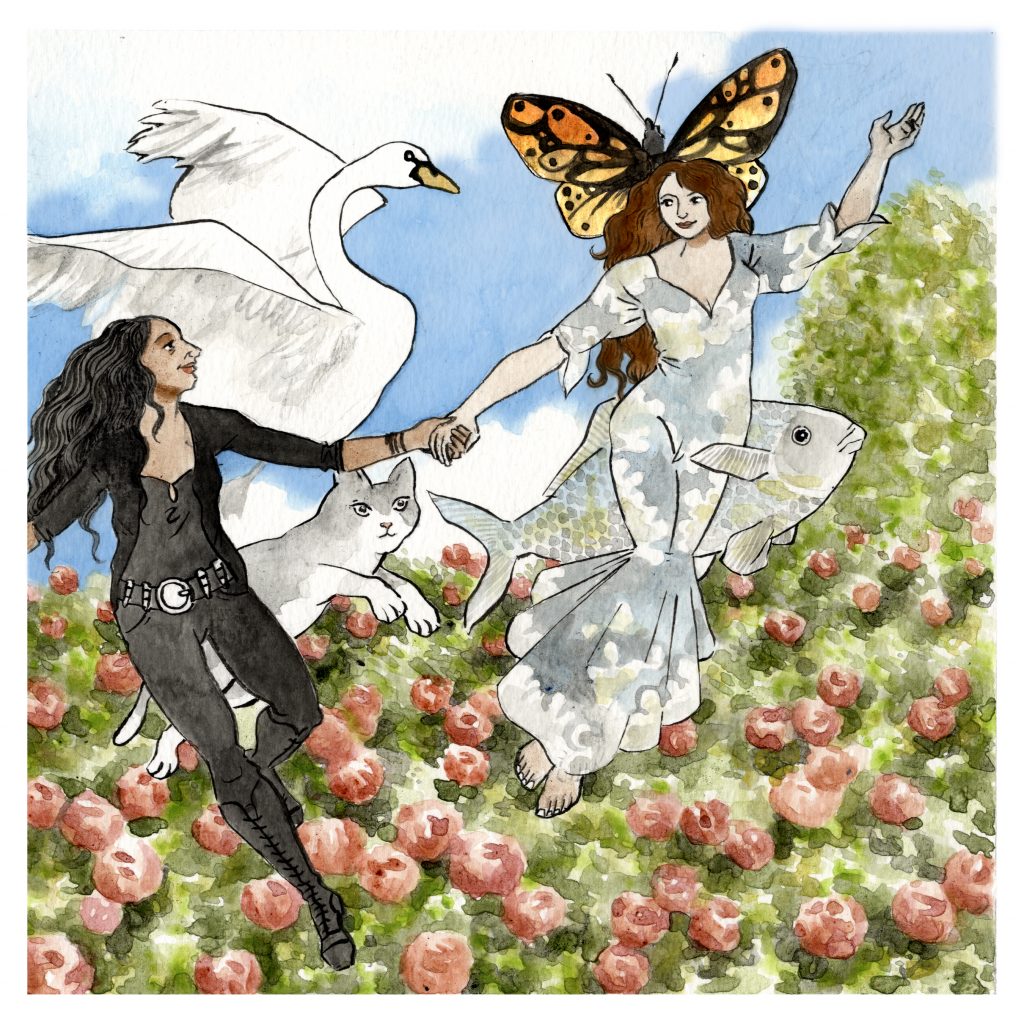 Illustration by the author.

Way before I knew I was trans, sitting on the lime green carpeting of my bedroom, playing vinyl on our little “Dansette”-style record player, I was drawn into the world of Kate Bush, into soundscapes that spoke of multifaceted femininities: swirling eddies of intimacy, strength, vulnerability, warmth. Kate’s first two albums, The Kick Inside and Lionheart, spoke to me of the qualities of being femme, which I found at the time simultaneously unattainable and familiar. Now I was by no means a Kate completist like her more rabid fans, but I sought out bootlegs when I could and was more than a little verklempt, one day at a record stall in London’s Kensington Market, to come across a cassette called Cathy’s Album (the artwork for which seemed to have been created on a dot-matrix printer) containing Kate songs I’d never heard before. What were these? It was 1989: no online research or instantaneous answers to private musings. The recordings on this tape were scratchy and old but suffused with an ardor and longing that I recognized from her early albums. Kate, ever precocious, had recorded these songs as a teen — these were tunes that failed to make the cut onto her official records but I found in them the same sweetness with which I was familiar, though the contraction of the music to just Kate’s voice and piano seemed to distill this essence.

A decade or so later, eating lunch at my desk at work and trawling through the internet, I came across an old-school website devoted to Kate, all sparkly fonts and tiled backgrounds, with a tantalizing link buried within paragraphs, winking at me in violet type: The Phoenix Demos? A click took me into a treasure trove of MP3s — all the songs from my old bootleg cassette plus twenty-odd others, heretofore undiscovered. It was like having lived in a house for your whole life, only to be drawn up to the attic one day to unearth a steel trunk containing all your gran’s old jewels. Here were all the emotional flourishes I loved from Kate’s catalogue but in embryonic form: her portrayals of gay men (as evidenced in Lionheart’s “Kashka in Baghdad”), whose energy seemed to me to be femme-adjacent (“Hey, boy, you’re so young / to be a queen weeping / You’re just a little princess / Oh, Eddie, don’t!” from “The Gay Farewell”), and her sketches of intimate moments, filtered through a crystalline innocence (“I know how you like to kiss / I’ll ask you what you’re thinking / Silvers in our dark hair / The sheets are soaked by your tiny fish” from “Craft of Love”).

I come back to these songs time and again, when the tumult and crassness of our modern world brings me down, and I retreat into a Kate-world of bedrooms, gardens, lace and chintz, heaving sighs, fumbling eroticism and femininity — a psychic landscape which I thought I’d never have access to, until Kate gave me the key.

See All Posts by Bishakh Som

Bishakh’s work has appeared in The New Yorker, The Strumpet, The Boston Review, Black Warrior Review, VICE, The Brooklyn Rail, Buzzfeed, The Huffington Post, The Graphic Canon vol. 3. She received the Xeric grant in 2003 for her comics collection Angel. Her comics will also appear in We're Still Here (The first all-trans comics anthology). You can see more of her work at Bishakh.com.