One in a series of 25 enthusiastic posts, contributed by 25 HILOBROW friends and regulars, on the topic of our favorite animated TV series. 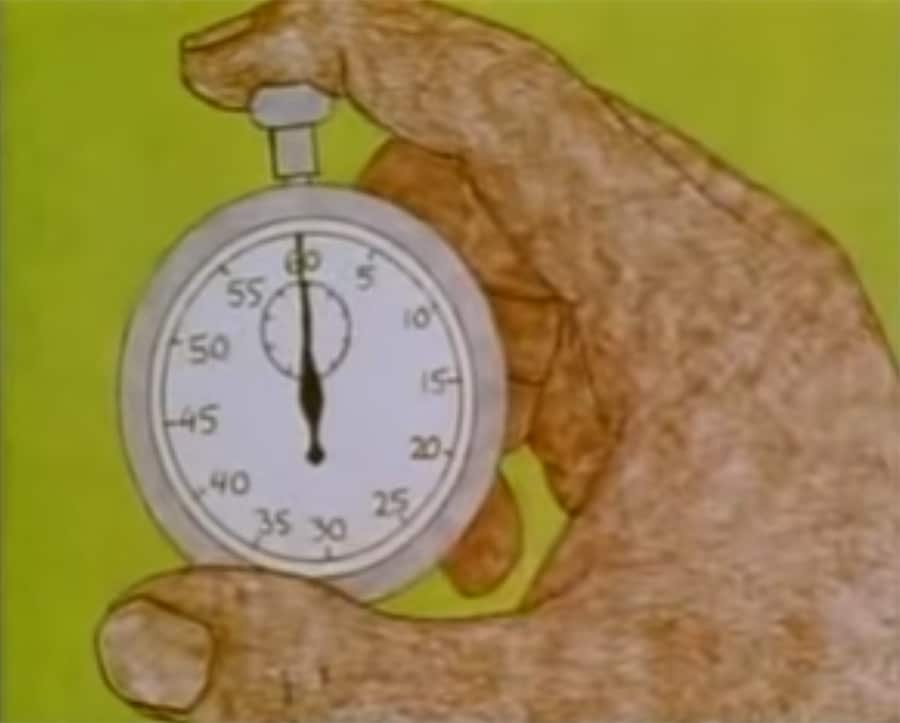 I sometimes wonder if I consistently overrate the eeriness of children’s television programming of my youth. Then I remember Al Jarnow’s “Cosmic Clock.”

This two-minute animation segment appeared on PBS’s 1980 children’s science series 3-2-1 Contact, which was seen in reruns throughout the early 1980s. 3-2-1 Contact‘s filtering of scientific concepts through lenses like art and music made it eminently rewatchable: the perfect series for a precocious science-mad grade schooler like me.

“Cosmic Clock” takes a cue from animations such as Charles and Ray Eames’s “Powers of Ten” to teach us a lesson in scale. But, as the narrator of “Cosmic Clock” says at the outset, “We are going to take a trip… not in space, but in time.” As the kid on the hillside clicks his stopwatch and his dog dashes off, we’re off: on an exponentially accelerating trip into the future. Natural rhythms — the tides, the phases of the moon, the seasons — soon give way to man-made ones. “The town becomes a city,” futuristic towers bloom, rise and fall, as our protagonist grows old and the “camera” conspicuously pans away as he reaches the end of his merely human lifespan.

It’s then that the natural landscape’s primacy returns; the last vestiges of humanity are swept away in ice ages and huge tectonic changes; eventually, even planet Earth itself disappears as the narrator intones the end mark of our trip: “One billion years!” Our avatar returns, young and vital again, at the end of the two minutes, clicking off his stopwatch, but our journey to the literal end of the Earth remains in our memories, forever.

Why is “Cosmic Clock” so traumatically memorable? It’s not just its subject: the inexorable (and constantly accelerating) march of time. It’s the aesthetics. The sound design — both the constant inescapable ticking of the stopwatch and synthesized music both familiar (a “Deck The Halls” motif when winter arrives) and uncanny (weird sounds played as the futuristic tower blocks appear). The animation style starts off inoffensive, familiar, homey, like many of the era’s public television cartoon segments. By the end of “Cosmic Clock,” we’ve seen alien sights that no human being alive in 1980 would ever be around to witness.

I once showed “Cosmic Clock” to a millennial friend of mine, who said instantly after viewing, “Michael, this… this explains so much.” Her jest about the creepiness of my generation’s TV programming hides an undeniable kernel of truth: it had a penchant for scaring the pants off us. Jarnow, an experimental animator whose films appeared in art cinemas and museums and on PBS, created art much like other producers of children’s programming in the 1970s and ’80s, works that didn’t talk down to us as a kid audience, that let our imaginations fill in the blanks: a true constructivist pedagogy. The reason I remember “Cosmic Clock” by heart even today, 40 years later, isn’t only because it was eerie and scary; it’s because an adult trusted me to learn — and process the meaning of that learning — myself.