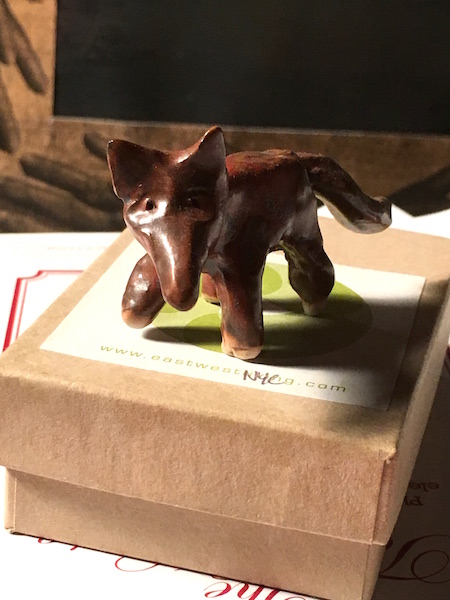 My wife was walking through the East Village and came across two very young children outside a ground floor storefront converted to an apartment. The kids had an array of clay animals they had obviously made laid out on a folding table for sale. My wife told me later that if she’d had more money she would have snapped up everything they had. Instead, she selected the fox, pinched together by little fingers and simply glazed, as a present for me.

I’ve had the very good luck to see foxes in the wild on a few occasions, and each time I have been amazed. Perhaps there’s something about the wily determination of a predator small enough to itself become prey that draws me – that somehow connects to being human. The last time, I was in the winter woods of New Hampshire, working in a small cabin when, in the midst of a light snowfall, a pair of foxes padded nonchalantly across the front of my window. For the next three weeks I would find fresh tracks in each morning’s new snow, but I never saw either fox again.

The clay fox sits on my very cluttered desk, amongst many, many other objects collected here and there. But when I leave home for any period, especially when I’m working, it’s the fox I take with me. The fox is a token of my wife and our home. It’s a reminder of kitsune, the familiars of the kami Inari. It’s an echo of Seminole Sam, the huckster from Pogo. Of Reynard the vicious trickster. The fox is a fetish of resilience and cunning, qualities without which I can’t imagine any writer survives.

I’ve had the fox for years. I am still struck by its unglazed paws. The pencil-poke dotted eyes. The thickness of the tail. The right front paw, just lifted, ready to move.