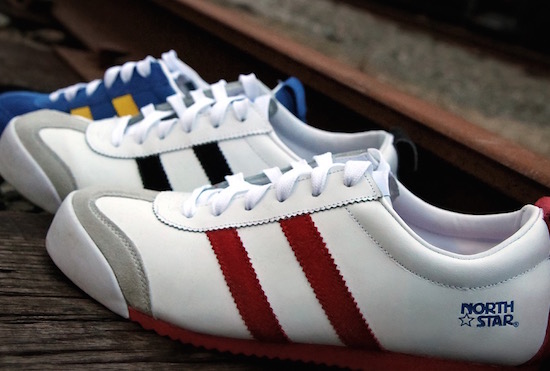 I think I am a collector. I’m not sure. Though my house is far from the junk-jammed ratholes you see on hoarder reality shows, I do have far more stuff than I can ever use or enjoy properly. Art, books, comics, bobbleheads, fishing gear, what have you; also sneakers, lots and lots of sneakers. I have sneakers I have not only never worn but never laced up. I have a pair of hand-painted Converse All-Stars with Star Wars scenes on the high-top panels. There are a lot of beautiful and memorable pairs of kicks in my collection, which is laid out on the bedroom floor in a sort of madman’s grid. There are Adidas Gazelles and Shelltoes, Pumas of every kind, Osiris Bombers and Fallen skaters, some throwback Nikes with waffle soles, Vans and DC low-riders, knock-off green-stripe Adis from a souk in Doha, and about half a dozen unpainted Chucks in various hues. I accept this beautiful insanity, and feel no need for justification. I like sneakers; I wear them almost every day of my life.

But there is one pair in my collection that deserves a special mention, because they are the only ones that exactly replicate what I used to wear before I had this slightly goofy urge to dispose of my disposable income in running shoes. They are Canadian-made North Star two stripes, the primordial sneaker of my 1970s Prairie adolescence. (For the record, mine are from a 2010 brand reboot.) The logo’s typeface remains one of those instant signifiers of the tense we must label, after Svetlana Boym, the Future Nostalgic.

We called them runners, not sneakers (sneakers was considered an Americanism, like the English ‘plimsoles’). They were chunky and a little bit ugly, snub-toed and spongy on the sole. There was a suede leather tab on the heel to aid in pulling them on. The favoured versions were white with red stripes and white with blue stripes. Two stripes were a subtle snub to the ubiquitous Adidas three-stripe design, and gave us provincial Canadian kids, budding cultural nationalists, a clothes-peg to hold up a somewhat diaphanous curtain of identity. Pair with some straight-leg GWG jeans — from the Great Western Garment company, based in Alberta — and a Kiss, Cheap Trick, or (most likely) Rush t-shirt, and presto: the perfect uniform of life. In summer, we wore them with striped knee socks and cut-off shorts, or just bare feet around the campsite, and sleeveless sweatshirts. Yes, our hair was centre-parted and feathered.

We thought we were cool — people of the North Star not the All-Star. The narcissism of minor differences, maybe. But identity-formation is always about distinction, however slim or trivial, as Bourdieu reminds us. Two stripes! Both North Star and GWG were later absorbed into larger U.S. companies, but some stock is still kicking around — if you’re a collector. Not long ago, I bought the last two pairs of black GWG straight-legs left in Ontario, from a surplus denim shop, to go with the awesome North Stars. I no longer have my father’s old GWG ‘Road Kings’ jean jacket, bought when he acquired a Honda 750 cruiser and later handed down to me, but the North Stars keep the faith. Yes, cool, not creepy!